Triple-digit year-on-year growth in global TV streaming | Online Video | News | Rapid TV News
By continuing to use this site you consent to the use of cookies on your device as described in our privacy policy unless you have disabled them. You can change your cookie settings at any time but parts of our site will not function correctly without them. [Close]

The World Cup has given a huge kick to online video as research from Conviva has shown that concurrent streams spiked during the football tournament, eclipsing previous records by more than double, while quality improved across all key metrics. 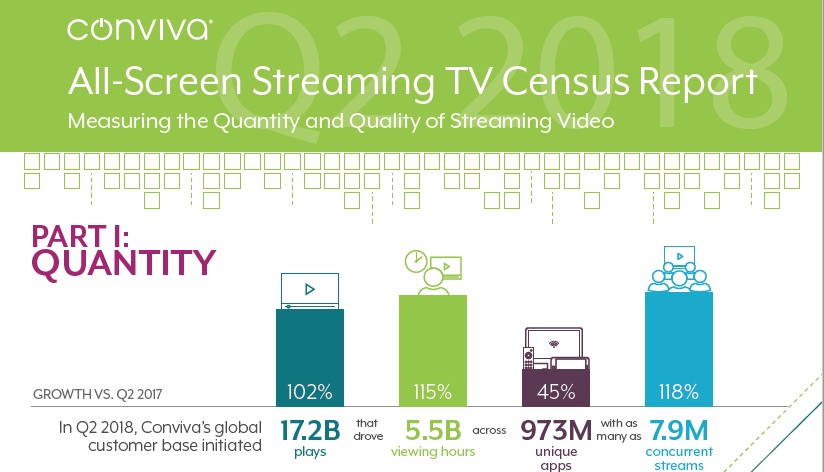 Conviva’s Q2 2018 report found consumers are streaming more than ever and growth is continuing to accelerate as the device landscape evolve towards mobile and connected TVs.

Conviva observed new peaks in both total and concurrent plays in Q2 2018, with a record-breaking 7.9 million people streaming the France vs. Argentina World Cup match concurrently on 30 June and a total of 5.5 billion viewing hours consumed during the quarter. This represents a 118% growth in peak concurrency and 115% growth in total plays from the same time period last year.

These figures, said Conviva, highlight the importance of live sports, which represent the high watermark publishers must plan for through informed and targeted investments to continually upgrade their infrastructure. The study also revealed that PC use for streaming TV is declining in favour of mobile devices, especially for short-form content, while connected TV platforms — led by Roku, with 22% of all viewing hours and 8% of all plays — are favoured for long-form content. PCs accounted for 24% of plays, while that for mobile devices was 49%.

Sony PlayStation, Google’s Chromecast, and Amazon’s Fire TV all showed what Conviva called ‘tremendous’ gains, experiencing more than two times video consumption compared to the same period a year ago. Roku, PlayStation, Xbox, Apple TV, Amazon Fire TV, and Chromecast platforms accounted for 51% of total viewing hours. Some of the growth comes at the expense of native TV platforms, such as Samsung’s smart TV, which have experienced year-over-year declines.

Even though it noted the improvement in quality, Conviva cautioned that there was still room for improvement in this regard. It observed that while North America and Europe saw quality improvements across the board, while Asia lagged behind in both picture quality (bit rate) and rebuffering. Conviva calculated that 3.1 billion plays out of over 20 billion attempts were still lost due to poor streaming quality, translating to nearly a billion viewing hours of engagement that was not realised.

“The demand for streaming TV globally is growing at a stunning rate,” said Conviva CEO Bill Demas. “Roku and Amazon’s Fire TV are leading the connected TV charge with growth and share of engagement. We’re excited to share the impressive trends from the report that are continuing to accelerate year-over-year along with specific areas of improvement needed for successfully delivering high quality video to consumers.”

The full Conviva Q2 2018 report is available at https://www.conviva.com/research/convivas-screen-streaming-tv-census-report-q2-2018/
Tweet