Denistron launches an upgraded line of broadcast displays | Infrastructure | News | Rapid TV News
By continuing to use this site you consent to the use of cookies on your device as described in our privacy policy unless you have disabled them. You can change your cookie settings at any time but parts of our site will not function correctly without them. [Close] 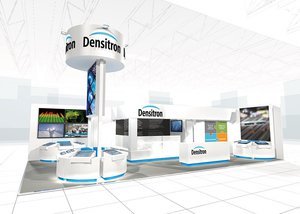 Available in three sizes, 4”, 4.3” and 5”, Densitron’s MIPI DSI displays feature high-colour saturation, readability at all viewing angles and projected capacitive touch (PCT) and optical-bonding options. There is also the possibility of adding haptic feedback technology to provide the sensation of touch when a user makes contact, plus lens customisation for all of these options.

The displays enable low-power, low-electromagnetic interference (EMI), yet permit high performance applications allowing for the interconnection of other components such as cameras, said the company.

Using a reduced number of wires and operating at a lower-power consumption to conserve battery life, the MIPI DSI interface is capable of handling very fast speed signals for driving ultra-high resolution, premium performance displays, from HD to FHD and beyond. With its simplified pin count, it benefits from a significant reduction in electrical noise and, therefore, limited EMI susceptibility.