SVOD feeds Australians' insatiable appetite for streaming content | Media Analysis | Business | News | Rapid TV News
By continuing to use this site you consent to the use of cookies on your device as described in our privacy policy unless you have disabled them. You can change your cookie settings at any time but parts of our site will not function correctly without them. [Close]

The Australian subscription video-on-demand (SVOD) services market continues to grow strongly, reaching 9.1 million subscriptions at the end of June 2018, a year-on-year increase of 54%, according to research from Telsyte. 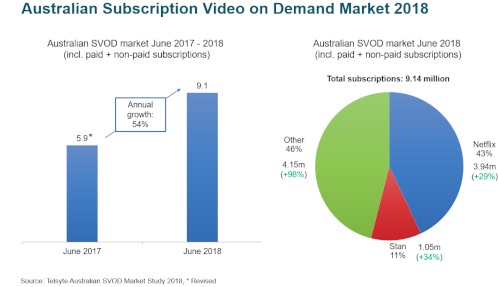 Streaming entertainment is quickly becoming the mainstream way consumers view video content. In total, Telsyte estimates 43% of Australian households subscribed to SVOD services at the end of June 2018, an increase from around 30% a year ago. This compares with around 70% in the USA and 60% in the UK.

The technology analyst firm also found that over the same period, SVOD revenues in Australia grew by 90%, reaching over AUD$700 million at the end of the 2018 financial year and forecasts Australians will hold more than twice as many SVOD subscriptions (22 million) by the end of June 2022.

As with everywhere else it would seem, the country’s market leader is Netflix with around 3.9 million subscriptions, with Stan in second place with a little over a million. However, new services such as Amazon Prime, local service Foxtel Now and a growing list of popular sports and special interests are collectively feeding Australians' hunger for video content. Soon to arrive SVOD services, including potentially those from Disney, HBO and various sporting codes, are expected to appeal to even more audiences.

The uptake of SVOD services is putting pressure on traditional pay-TV, which is found in around one-third of Australian households (end of June 2018), a similar level to 2017. The growth of Fetch TV, which allows access to both SVOD and pay-TV content via its set-top boxes, offset the decline in Foxtel subscriptions.

However, Telsyte managing director Foad Fadaghi said the SVOD market is not showing signs of being winner takes all. “Consumers are becoming comfortable with multiple subscriptions and are subscribing to different providers for exclusive content and live sports,” he said.

Australians’ love for sports has been a big driver for SVOD, with sporting codes like AFL, NRL and Netball (all exclusive to Telstra) showing strong demand, with usage exceeding the reported 1.5 million subscriptions in February 2018. Other popular niche services include UFC, NBA and MLB. Despite the technical issues, Telsyte estimates that more than 2 million Australians watched the FIFA World Cup in June 2018 via Optus Sport.

SVOD services are also big drivers for data consumption across fixed broadband and mobile networks. “Average monthly data usage on mobile and fixed broadband by SVOD users are both over 45% higher when compared with those that do not use SVOD,” added Telsyte senior analyst Alvin Lee.

SVOD depends on broadband connectivity and as the much-maligned NBN and 5G wireless deployments continue, more Australians will be able to access streaming in 4K HDR quality, which is fast becoming standard on new smart TVs, and is increasingly supported on other digital devices.

Telsyte research found 1 in 6 Australians streamed movies or TV shows in 4K HDR in the last 12 months. Among 4K TV owners, a third streamed 4K HDR content, demonstrating growing consumer appetite for higher video quality when available. Telsyte calculates that 4K TVs are already in some 15% of Australian households and penetration will grow to around 50% by 2022.

According to Telsyte, growth in uptake of catch-up and live traditional TV streaming services — sometimes called broadcast VOD and offered by 7Plus, 9Now, tenplay, ABC iView, SBS On Demand — has slowed down, with SVOD penetration on track to overtake it. Telsyte estimates there are currently 4.1 million households with SVOD services versus 5.2 million households with broadcast VOD.

However, broadcast VOD and ad-free services in the case of ABC iView, continue to be an important channel for children’s content with more than 5.5 million children viewing these services, a 6% year-on-year increase.