Content not king for Amazon Prime subscribers | Media Analysis | Business | News | Rapid TV News
By continuing to use this site you consent to the use of cookies on your device as described in our privacy policy unless you have disabled them. You can change your cookie settings at any time but parts of our site will not function correctly without them. [Close]

Despite the company’s significant investment in original content to keep up with SVOD and online video rivals, Amazon Prime users’ favourite feature is not video at all: in fact, it’s free shipping says research by The Diffusion Group (TDG). 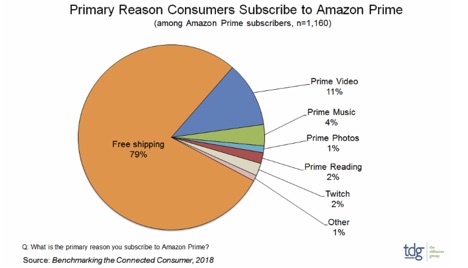 More than half of US adult broadband users currently subscribe to Amazon Prime. Yet in its ninth annual Benchmarking the Connected Consumer study, TDG found that as many as 79% of Amazon Prime users cite cost-free postage as the primary reason they subscribe to the service. Only 11% cite Prime Video, with a collective 10% citing Prime Music, Photos, Reading, Twitch, or other benefits.

TDG acknowledged the investment that Amazon had made in the video market, especially in original content such as The Man in the High CastleMan in the High Castle, and said that adding high-quality digital media to Prime has certainly sweetened the deal to bring many new subscribers into the mix. It also pointed out that it is precisely the retail benefits of Amazon Prime serves to differentiate it from media-only competitors like Netflix and Hulu in the video industry.

Yet TDG noted that once such customers begin to buy more merchandise, service value appears to shift from media to free shipping.

“While Amazon Prime is building robust audiences in video, music, and gaming,” commented TDG president and director of research Michael Greeson. “Prime is first and foremost about developing more and broader retail relationships, and free shipping is key to that mission. That is where the real value of Prime lies. This is not to diminish the value that digital media services add to the Prime equation, but it puts it into perspective relative to retail. The competitive threat that Amazon poses to the media industry is unique. Video, music, and gaming services are largely loss leaders to Amazon's cash-cow retail business. This strategy continues to enable the company to disrupt not only established media verticals but a widening array of other goods and services.”