Virtual multichannel market set for real boom | Pay-TV | News | Rapid TV News
By continuing to use this site you consent to the use of cookies on your device as described in our privacy policy unless you have disabled them. You can change your cookie settings at any time but parts of our site will not function correctly without them. [Close]

Even though it will only likely contribute a fraction of the revenues generated by the overall TV market, the virtual multichannel industry is however, says analyst Kagan, set for strong growth rising to nearly $7.8 billion by 2022. 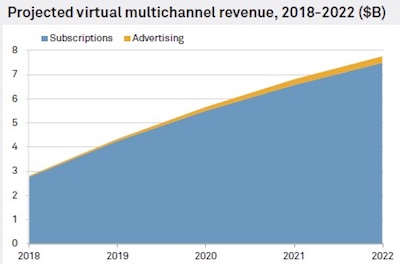 The five-year virtual multichannel revenue forecast from the division of S&P Global Market Intelligence fundamentally underscores the segment’s opportunities. The figure expected to be gained by 2022 compares with the $2.8 billion in overall revenue projected for 2018.

Due to their relatively low prices and lack of long-term contracts compared with pay-TV packages, virtual multichannel, or so-called skinny, video services have attracted hundreds of millions of subscribers worldwide, causing pressure on traditional operators to compete through offering their own versions. Prime examples include DirecTV Now, Dish Network’s Sling TV, and Sky’s NOW TV. In addition, Hulu and YouTube launched live streaming packages in 2017 creating more competition in the vMVPD market.

Kagan estimates that virtual multichannel average revenue per sub is roughly one third of traditional cable services but growing: Estimated average monthly revenue is expected to top to $37 in 2018 after a 19% year-over-year gain. The study also found that there is a wide range of offerings within the virtual multichannel arena and that the segment is evolving. Kagan notes that DirecTV Now, for example, has four packages ranging from $40 to $75 a month. SlingTV and Philo have bundles that fall on the skinnier end of the spectrum.
Tweet