Eight OTT services dominate OTT landscape in the US | OTT | News | Rapid TV News
By continuing to use this site you consent to the use of cookies on your device as described in our privacy policy unless you have disabled them. You can change your cookie settings at any time but parts of our site will not function correctly without them. [Close]

Eight OTT services dominate OTT landscape in the US

Despite the huge take-up of such services across the country, as few as eight over-the-top services have a market share of more than 10% (5.95 million households) in the American market says research firm comScore. 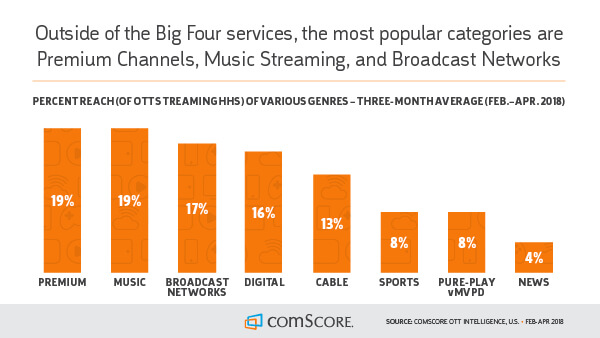 The analyst’s State of OTT report found that the market consists of a few high-reach apps and many low-reach services. Of the roughly 70 OTT services tracked by comScore, more than a third reach less than 1% (fewer than 600,000 households).

Overall, 34% of households that stream any OTT service have no traditional pay-TV service in place. Hulu has the highest percentage of cord-cutting households, the report found.

The comScore report  breaks services into skinny TV/live vMVPD services like Sling, DirecTV Now, PlayStation Vue, fuboTV and Philo; premium refers to premium cable nets with OTT services, like HBO, Showtime and Starz. Digital services is a catchall of services not offered on linear TV, such as Tubi TV and Xumo.

In April 2017, 29% of households using a pure-play vMVPD had a head of household under age 35. In just one year, that percentage dropped to only 21%, indicating older segments are adopting vMVPDs.
Tweet