Movistar Series furthers original content rollout plan | Programming | News | Rapid TV News
By continuing to use this site you consent to the use of cookies on your device as described in our privacy policy unless you have disabled them. You can change your cookie settings at any time but parts of our site will not function correctly without them. [Close]

Telefónica’s Movistar pay-TV division is continuing with its plan to offer increased amounts of original content with the premiere of comedy Look What You've Done. 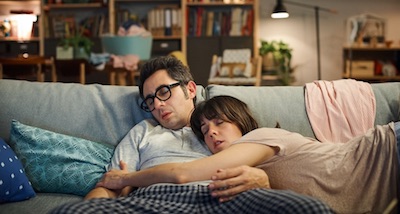 The six-episode original production was created and written by Berto Romero, Spanish stand-up and television comedian, and directed by Carlos Therón and calls itself an urban comedy that shows how a contemporary couple faces the arrival of their first child, looking at what it means to be parent and what it means to be a child.

Romero plays himself alongside and Sandra, played by Eva Ugarte, facing the parenting adventure with the arrival of baby Lucas. Romero is and plays a comedian and television presenter, and Ugarte is an anaesthesiologist who together must reconcile a new situation in which their family, friends and even the world will always have an opinion and theories to apply to parenthood. It is based on Romero’s own experiences and claims to portray aspects of the fatherhood that not many dare to show. “Look What You Have Done is a romantic comedy in which the boy-meets-girl becomes girl-and-boy-know-baby,” Berto remarked.

The show will be available on the Movistar Series channel dedicated to showing original TV shows and films made in Spanish from Spain and Latin America. Movistar Series is available through Movistar TV and the Movistar Play app in Peru, Chile, Colombia, Ecuador, Costa Rica, Guatemala, Nicaragua, El Salvador and Panama.