BBC iPlayer receives 1.6MN requests for Ultra HD content during World Cup, Wimbledon | Ratings/Measurement | News | Rapid TV News
By continuing to use this site you consent to the use of cookies on your device as described in our privacy policy unless you have disabled them. You can change your cookie settings at any time but parts of our site will not function correctly without them. [Close]

After announcing huge TV and record online audiences for its World Cup football coverage, the BBC is now claiming a hat-trick with the performance stats for its trial of Ultra HD during the tournament, added to that of Wimbledon tennis. 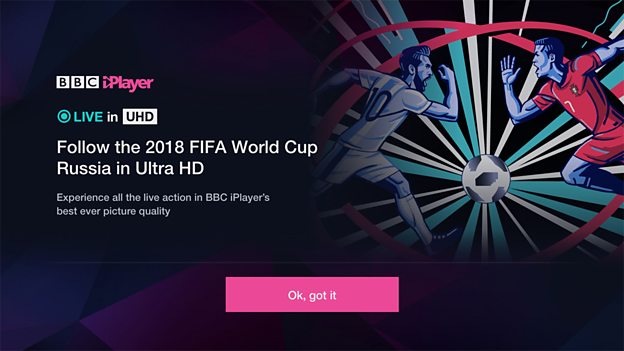 The tournament marked the first time that the BBC had shown such a major event live in Ultra HD on the iPlayer, with the trial attempting to giving viewers a chance to watch the action in what the BBC called ‘unprecedented’ quality. The trial saw  all 29 of BBC One’s World Cup matches available in Ultra HD and high dynamic range (HDR) on the BBC iPlayer using the hybrid log-gamma (HLG) version of HDR it invented with Japanese broadcaster NHK. It also coincided with Ultra HD coverage of Wimbledon tennis on the iPlayer.

The results have shown that the BBC iPlayer received over 1.6 million iPlayer requests for its live Ultra HD coverage of the World Cup and Wimbledon. The most popular day by far was Saturday 7 July when the combination of the Sweden v England quarter final and day 6 of Wimbledon generated 60,300 peak Ultra HD streams. This day will surely go down in the annals of the BBC as it also saw unprecedented live audiences for the HD/SD steam of the game on the iPlayer.

Three days later, the France v Belgium quarter final and day 8 of Wimbledon drew 48,100 peak streams and Sunday 15 July which saw finals in both the football and tennis drew 44,300 streams.

Commenting on what he felt had been achieved with the trial, Phil Layton, head of broadcast and connected systems at BBC R&D, said: “The trial is an important step forward, showing for the first time that Ultra HD and HDR can be delivered live and free-to-air over the Internet. It’s part of the BBC’s mission to ensure that future audiences can enjoy the benefits of improved picture quality, and this trial follows on from our work ensuring viewers were not left behind by the move to HDTV, albeit with different technologies.

“We wanted to demonstrate live end-to-end Ultra HD, but we have always felt that Ultra HD needed to be more than just extra pixels. So we also wanted to demonstrate a wide colour gamut and the HLG that the BBC and NHK have standardised. This is essential to improving the visual experience irrespective of the viewer’s screen size. Finally, we wanted to do this free-to-air, streamed to BBC iPlayer, at a scale never seen before in the UK.”