Smart TVs set to account for 70% of all TV sales by end of 2018 | 4K/UltraHD | News | Rapid TV News
By continuing to use this site you consent to the use of cookies on your device as described in our privacy policy unless you have disabled them. You can change your cookie settings at any time but parts of our site will not function correctly without them. [Close]

The popularity of smart TVs has been shown clearly in research from IHS Markit calculating that that the global unit-share of such products rose from 45% of total TV shipments in 2015 to 64% in 2017 and likely 70% by the end of this year. 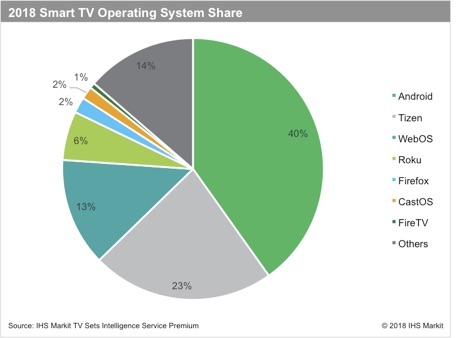 The analyst believes that smart TV s are enjoying a sales spike just as global TV shipments recover in 2018 due to increased price erosion from declining LCD TV panel prices, with shipments rising 3.5%to 223 million units.

It adds that consumers are increasingly consider streaming to be a basic TV function of comparable importance to off-air broadcast reception. Moreover, IHS Markit notes that streaming remains the only way to access Ultra HD (UHD) content for most consumers, with smart TV reinforcing the value of 4K resolution screens, which are now being sold at mass-market prices. At the same time, it says that the effect of government-imposed mandatory interactivity for TV services in Brazil and Argentina has boosted Latin America into the top three global regions for smart TV adoption.

The report found that Android was currently the most popular smart TV operating system platform, including both the full Android TV implementation and modified versions used by many Chinese TV brands. IHS Markit expects Android to continue to gain share through 2022, as a common third-party platform with native support for Google Home. Proprietary smart TV platforms from Samsung (Tizen) and LGE (WebOS) are the second- and third-most popular smart TV operating system platforms.

While it expects Roku TV to expand beyond North America over the next five years, IHS Markit also speculates that Fire TV might also become available in other regions, provided the US partnership between Amazon and Best Buy is successful.

“Global growth is expected in all regions this year, and positive annual unit growth is forecast to continue during the build-up toward the 2020 Summer Olympics in Tokyo,” said IHS Markit research and analysis executive director Paul Gagnon.

“The rise of streaming video availability worldwide, especially for special events like the World Cup and Olympics, along with continued growth for global streaming video services, have encouraged strong growth in smart TV sales in recent years. The increased availability and integration of Amazon Alexa, Google Home and other popular digital voice assistants will further increase demand for smart TVs in 2018 and beyond. Streaming video is also the most common way for consumers to view 4K content while broadcast and pay TV options are limited, further fuelling smart TV adoption.”
Tweet