Live TV no longer the first viewing choice for consumers | Media Analysis | Business
By continuing to use this site you consent to the use of cookies on your device as described in our privacy policy unless you have disabled them. You can change your cookie settings at any time but parts of our site will not function correctly without them. [Close]

Live TV no longer the first viewing choice for consumers

In what may be an inflexion point for the broadcast industry, a study from Hub Entertainment Research has found that as consumers adopt more platforms, even older viewers are abandoning live TV as their home base. 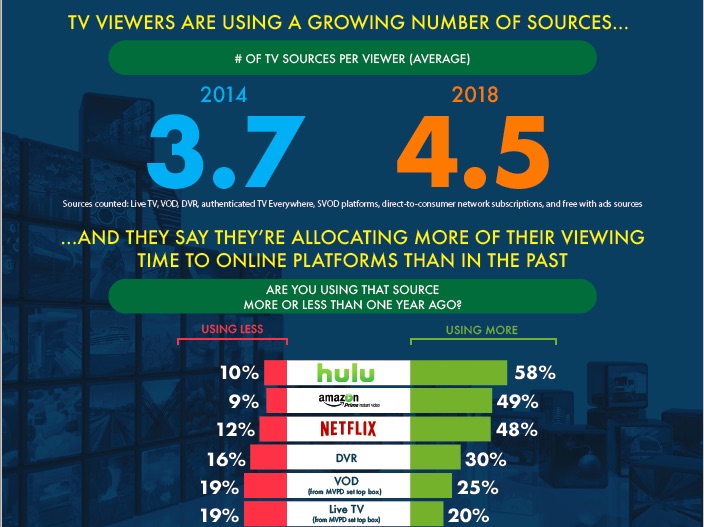 The latest edition of the Decoding The Default annual study tracking the TV sources which consumers consider as their go-to viewing platform has revealed a continuing increase in multiple platform use and a steady move away from live TV as a default source.

Only 39% of viewers now say live, linear TV from a traditional pay-TV service is what they turn on first. That represents a fall of 8 points over the last twelve months. Consumers are now more likely to turn first to an on-demand, time-shifted source of TV, including Netflix, Hulu, Amazon, a DVR, or pay-TV video-on-demand (48% combined).

The popularity of live TV is falling even in core demographics with the amount of older viewers who consider live TV their default dropping significantly. Even though the majority (56%) of viewers 55 and over still default to watching live, a year ago, this figure was two-thirds of such viewers. Among those 18-34, only about a quarter (26%) say that live TV is their default. A year ago, it was just more than a third (35%).

Multiple platforms are now proliferating with consumers using more sources for TV watching than ever before. The study found that the average consumer has 4.5 different sources to choose from when they’re ready to watch TV, including linear TV, DVR, video on demand, Netflix, Hulu, etc. That number is up from 3.7 in 2014. Among younger viewers age 18-34, the number of platforms used stands at 5.1 different sources and half of 18-34 year-olds subscribe to two or more of the big three SVOD providers.

“We’ve been watching live TV drop steadily as a default source since we first conducted this study in 2013,” said Peter Fondulas, principal at Hub Entertainment Research and co-author of the study commenting on the findings. “But this is the first year where we’ve seen a sharp drop among older consumers too which has huge implications for the monetisation of linear TV in general. As online, on-demand platforms continue to become mainstream, live viewing has become the exception rather than the rule.”

“There are categories where live TV still fills a vital role – especially news and sports, as well as channel surfing without anything specific in mind,” added fellow Hub principal Jon Giegengack, and one of the authors of the study. “But the skyrocketing variety of on-demand content means that occasions where consumers must follow a linear schedule to see content they care about are growing fewer and farther between.”