Netflix’s cost of adding new domestic subs hits triple figures | VOD | News | Rapid TV News
By continuing to use this site you consent to the use of cookies on your device as described in our privacy policy unless you have disabled them. You can change your cookie settings at any time but parts of our site will not function correctly without them. [Close]

Netflix’s recent global audience building campaign has been hugely successful but in the US, the cost of keeping and adding customers has resulted in spiralling marketing spend research from Ampere Analysis reveals. 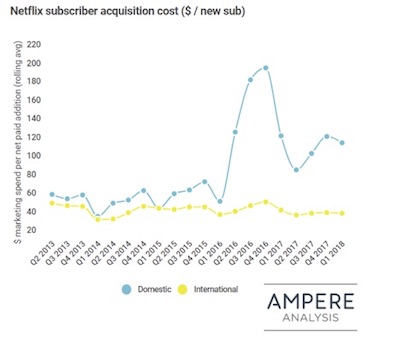 Ampere believes that Netflix’s domestic marketing spend has also risen significantly both in absolute and relative terms, currently spending £600 million, twice what it spent from 2014-2015, as domestic additions are beginning to slow due to the SVOD leader saturating its home market and thus meaning that each marketing dollar corresponds to an ever-decreasing number of new subscribers.

The analyst calculates that 14% of Netflix’s current expenditure is on marketing related costs with close to $1.3 billion being spent on advertising its streaming products in 2017, split roughly equally between domestic and international markets.

While overall marketing spend has increased significantly in recent years, and global expansion accounts for some of that growth, Ampere questioned whether the increase was proportionate. In 2016 Netflix spent just under $1 billion on global marketing and five years ago the company was spending around half that figure.

Looking at the effects of this increased expenditure, Ampere said that rising marketing spend combined with falling subscriber growth meant than it now takes Netflix 11 months to achieve payback on net new domestic customers, compared with only four months internationally. Ampere noted that if international markets follow the same trajectory as the US, with increasing levels of marketing required to drive a steady rate of new customers, subscriber acquisition costs could rise to approaching a fifth of Netflix’s total costs.

While conceding that Netflix did not publish churn rates, Ampere said that its research indicated that between a fifth and a quarter of US Netflix subscribers have a high intention of churning in a six-month period. Using benchmarks for other companies that show that roughly half of consumers follow through, this implied, said Ampere, an annual churn rate of 20%. It added that each 10% of annual subscriber churn currently adds an extra month to the payback period, meaning that Netflix will need to manage its domestic marketing budget carefully to tackle churn and drive additions.

Commenting on the research, Richard Broughton, Ampere Analysis research director said: “With declining domestic growth rates and spiralling acquisition costs, Netflix faces a very real set of challenges if it is to continue to command such a strong position. Our research show that while Netflix can continue to enjoy relatively low acquisition costs for international subscribers and a buoyant market keen to embrace SVOD, it cannot afford to take its eye off the ball in the domestic market, even momentarily. Its ability to grow ARPU will be critically important to manage long term growth - domestically and abroad.”
Tweet