UK mobile network usage soars during England World Cup games | Mobile | News | Rapid TV News
By continuing to use this site you consent to the use of cookies on your device as described in our privacy policy unless you have disabled them. You can change your cookie settings at any time but parts of our site will not function correctly without them. [Close]

Research from telco EE into fixed and wireless network consumption during the World Cup has shown just how the digital landscape media landscape has changed with mobile video usage soaring during the football matches. 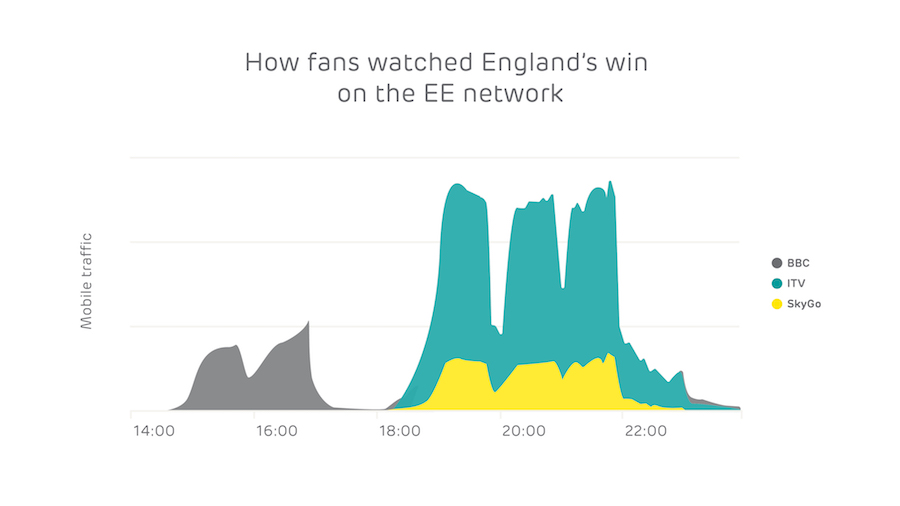 In the analysis of its network, EE found that its network has seen broadband internet usage drop drastically throughout all World Cup games while mobile demand rose as fans streamed the match on the go or moved offline altogether and tuned in on terrestrial television.

All World Cup games have been popular at this stage of the competition, as proven by the rising EE mobile traffic on BBC as the Sweden vs Switzerland game came to a close. More than three times as many people tuned in to watch the England vs Colombia game than the previous match available. EE experienced its lowest broadband demand for a year during the game against Colombia and its dramatic penalty shoot-out.

Fans also shared reactions on social during half time, at 90 minutes and before penalty shoot-out in the England game against Colombia with EE monitoring Facebook demand increasing throughout the match, with usage spiking at 188 gigabits of traffic on the EE network every second as Eric Dier slotted the winning penalty and fans took to social media.

Around a fifth of mobile viewers watched the ITV broadcast of the England vs Colombia game match via Sky Go, with mobile viewers dropping the live stream at half time. The amount of fans watching on mobile shot up as soon as the game went to penalties.