Amazon India to launch Raazi, Comicstaan for Prime Day | VOD | News | Rapid TV News
By continuing to use this site you consent to the use of cookies on your device as described in our privacy policy unless you have disabled them. You can change your cookie settings at any time but parts of our site will not function correctly without them. [Close] 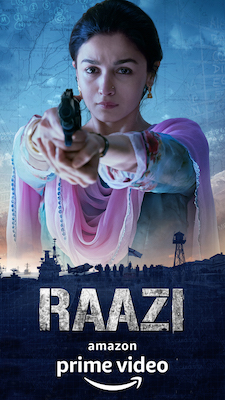 Bollywood blockbuster Raazi and the all-new Amazon Prime Original series Comicstaan, which seeks to find India’s next stand-up star, will be available to stream on 13 July.

In addition, Amazon Prime subscribers will be able to watch, on-demand, 102 Not Out, Dunkirk, Transformers: The Last Night, Angreszi Mein Kehte Hain, and Telugu movie Officer.

Now in its second year in India, Amazon said Prime Day will be bigger than last year with 36-hours of shopping and entertainment planned.

“We were humbled by the fantastic response to our first Prime Day last year and are delighted to bring it back for Prime members in India. Prime members in India can enjoy over 200 exclusive product launches, thousands of deals at the lowest prices of the year and blockbuster entertainment launches on Prime Video and Amazon Prime Music,: said Amit Agarwal, SVP & Country Manager, Amazon India .

“More than 100 million around the world, including India, will find this our best Prime Day celebration yet.”
Tweet