Gray-Raycom, Sinclair spin-offs boost Q2 TV deal market volume | Major Businesses | Business | News | Rapid TV News
By continuing to use this site you consent to the use of cookies on your device as described in our privacy policy unless you have disabled them. You can change your cookie settings at any time but parts of our site will not function correctly without them. [Close]

The second quarter of 2018 saw deal volume in the US TV industry register more than $5 billion through a number of major mergers and acquisitions according to media research group Kagan. 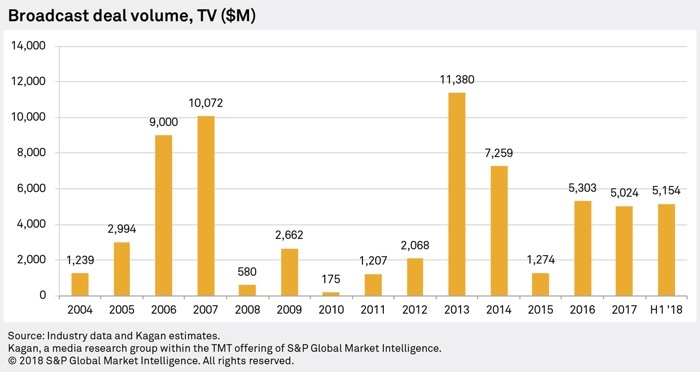 The analyst, part of S&P Global Market Intelligence, found that the volume was principally boosted by deals such as the acquisition of Raycom Media by Gray Television for $3.65 billion on 25 June. Including translators, Raycom owns the licences for 49 full-power and eight low-power TV stations and provides programming for an additional 14 stations. Kagan estimates the value of the TV stations at $3.44 billion, making the move deal the eighth-largest US TV station deal of all time and the largest since 2017’s merger of Tribune Media and Sinclair Broadcast Group.

The Sinclair/Tribune merger required a number of spin-offs to comply with US regulator-mandated ownership caps. After a first station divestiture in March for $60.0 million, 22 more stations were sold to five different buyers in April and May to meet FCC ownership caps. Those five deals were carried out at an average 8.0x forward cash flow multiple, amounting to a total of $1.48 billion.

The largest parts of the spin-offs were the sale of seven stations to Twenty-First Century Fox for $910.0 million and the transfer of nine stations to Standard Media Group for $441.7 million. In addition, Meredith Corporation bought one station for $65.0 million, Howard Stirk Holdings paid $4.95 million for three stations, and two licenses were transferred to local marketing agreement partner Cunningham Broadcasting for $60.0 million. The survey found that the only other large TV transactions were Gray Television’s $32.5 million purchase of KDLT-TV in Sioux Falls from Red River Broadcast and the $11.5 million sale of WMDE-DT in Washington, DC, from Western Pacific Broadcast to WRNN-TV Associates.

Yet, the Kagan research also noted that apart from the aforementioned few large deals, the deal market displayed a rather slow pace. It stated that excluding the Sinclair spin-offs and Gray's deal for Raycom, the total deal volume would have been the lowest since the fourth quarter of 2016, amounting to just $185.8 million.