Pay-TV growth slows in Europe after falls in cable, DTH subs | Pay-TV | News | Rapid TV News
By continuing to use this site you consent to the use of cookies on your device as described in our privacy policy unless you have disabled them. You can change your cookie settings at any time but parts of our site will not function correctly without them. [Close]

The European pay TV market grew by just 0.3% quarter-on-quarter to reach 185 million subscribers by the end of March 2018, according to Dataxis research. 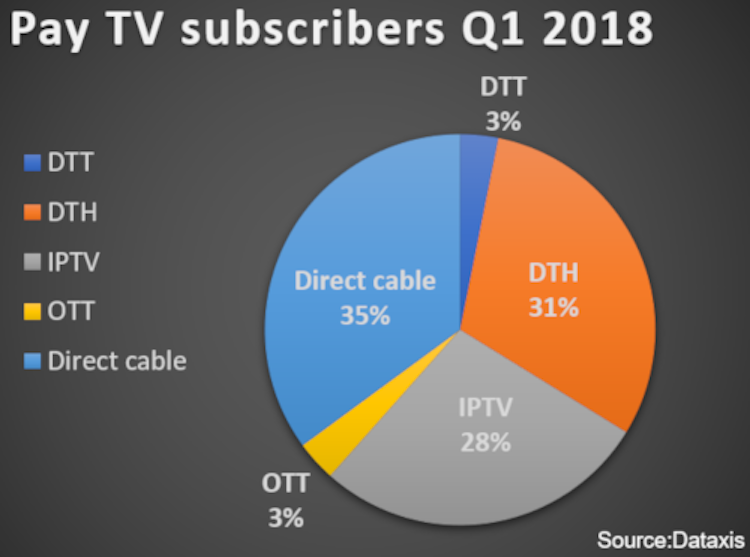 Of these subscribers, 35% receive direct cable services, 31% satellite and 28% IPTV. Over-the-top (OTT) and digital terrestrial TV (DTT) both represent only 3% of the total customer base.

“Direct cable is still the most used [pay-TV delivery] technology in Europe and represents almost 65 million subscribers, including 42 million for only digital cable, but decreased slightly in Q1 2018,” Dataxis said.

Liberty Global / Vodafone accounts for 31% of the subscribers, while the indirect cable market, provided by landlords and hospitality venues, amounts to 18 million customers, the research company added.

Although the DTT market remained stable in 2018’s opening quarter, recording a slight loss (0.35%) of subscribers, it is witnessing an overall decline. This, said Dataxis, is despite the 2017 launch of Freenet in Germany, which accounts for 18% of total DTT subscribers and attracted 47,000 more customers in the last quarter.

Europe’s IPTV sector maintained its rise with 1 million more subscribers at the end of March 2018 compared to the end of 2017; a 2% increase. The big IPTV hitters are Orange in France with a 10% and Russia’s Rostelcom with 13% market share.

Although still at a low base, OTT grew its subscription base significantly – recording a 47% rise when compared to the end of December 2016. OTT still represents just 3% of Europe’s total pay-TV market, but of this slice Poland’s Play Now serves a quarter.
Tweet