Rapid TV News - SVOD set to soar in Sub Saharan Africa
By continuing to use this site you consent to the use of cookies on your device as described in our privacy policy unless you have disabled them. You can change your cookie settings at any time but parts of our site will not function correctly without them. [Close]

The subscription video-on-demand (SVOD) customer base in Sub Saharan Africa is set to escalate to 9.99 million by 2023, up from 1.56 million at the end of 2017, according to Digital TV Research. 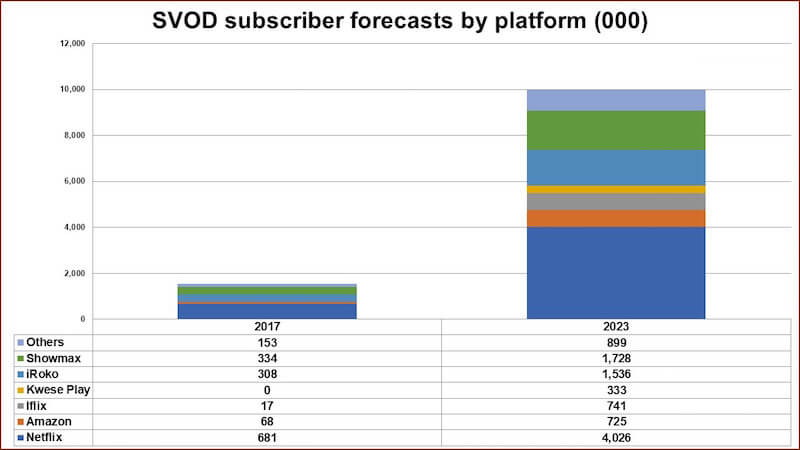 Revenues will reach a total of US$775 million by 2023, not fully reflecting the huge growth in the market due to the low subscription fees charged by some platforms, suggests the new study.

South Africa and Nigeria will together account for 60% of the region's SVOD subscribers by 2023, with the former having 3.37 million and Nigeria for 2.61 million subscribers by that time. In 2017, however, the two countries were home to almost three quarters (74%) of sub Saharan Africa’s SVOD customer base, illustrating the sector’s growth potential in other countries in the region.

Showmax and iRoko were the largest regional SVOD players in 2017, coming second and third respectively overall to global giant Netflix in terms of subscribers in sub Saharan Africa. These three OTT providers are predicted to retain their prominence in 2023, with Netflix strengthening its sub Saharan Africa base of 4.026 million, Showmax reaching 1,728,000 customers, and iRoko streaming to 1,536,000 subscribers.

In spite of its relatively high pricing plan, Netflix will account for 40% of the 2023 regional total, said researchers.

“Market dynamics have shifted over the last year. There have been fewer platform launches, especially on a country level. Furthermore, several multinational players are expected to rein in their ambitions whereas Netflix has consolidated its market leadership,” said Simon Murray, principal analyst at Digital TV Research.

“We believe that iRoko will concentrate mostly on West Africa. A significant stake in Iflix was sold to Econet, which we believe will mean more focus on Eastern and Southern Africa. Multichoice announced that Showmax will be given free to premium DStv subscribers across Africa, with Compact subscribers offered Showmax for half price.”