Cartoon Network leads Turner’s way in Central America | Ratings/Measurement | News | Rapid TV News
By continuing to use this site you consent to the use of cookies on your device as described in our privacy policy unless you have disabled them. You can change your cookie settings at any time but parts of our site will not function correctly without them. [Close]

Turner is Central America’s most watched pay-TV provider, driven in particular by Cartoon Network's performance, according to new ratings figures for the first half of 2018. 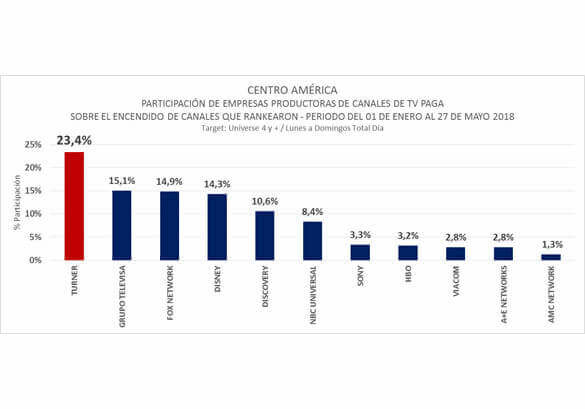 According to Kantar IBOPE Media research, Turner’s channels were watched by a 23.4% share of Central America’s pay-TV audience between 1 January and 27 May 2018. Televisa (15.1%) and Fox (14.9%) are the second and third broadcasters in terms of total audience share.

The research was based on audience samples from Central America’s largest pay-TV markets: Guatemala, Panama and Costa Rica.
“Four of Turner’s brands are among the 15 most-watched pay-TV networks in the region, namely Cartoon Network, TNT, Space and TNT Series,” the company said in a statement. Cartoon Network drew the highest audience.

The figures are similar to the audience figures revealed last May for the whole Latin America, when Cartoon Network and TNT were then the most highly watched channels. Turner also registered a greater number of viewers than other pay-TV operators in LATAM in May 2017.