Hispanics drive fútbol viewership in US | Media Analysis | Business
By continuing to use this site you consent to the use of cookies on your device as described in our privacy policy unless you have disabled them. You can change your cookie settings at any time but parts of our site will not function correctly without them. [Close]

Hispanics drive fútbol viewership in US

The US has historically lagged behind the rest of the world when it comes to international soccer fandom; but US Hispanic viewers have been a driving force behind a surge of popularity of late, according to Nielsen. 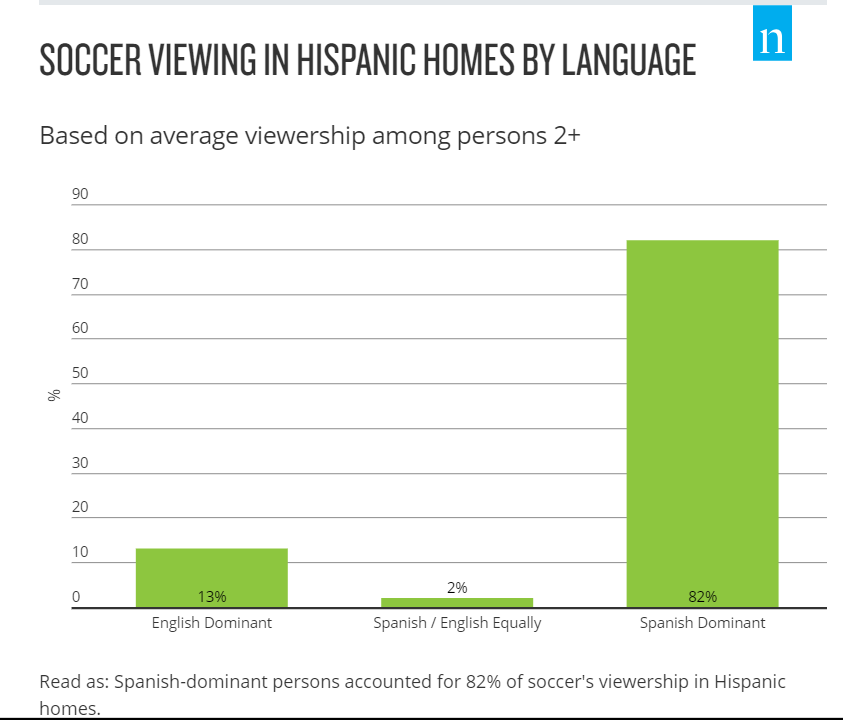 For soccer, Hispanic viewers accounted for the vast majority of viewership in 2017 – 68% of viewership, compared to about 12% of viewership to all sports, the ratings firm said. About 97 million people watched at least six minutes of a match last year, and over 32 million of them were Hispanic.

When looking at Hispanic TV homes, about 61% of their residents have watched at least six minutes of a game—more than any other race or ethnicity, and nearly double that of the US overall percentage.

The Hispanic soccer viewer also has a unique profile according to Nielsen—they’re younger than non-Hispanic viewers and Spanish-language dominant.

The firm noted that 42% of Hispanic soccer viewers are under the age of 35, compared to 31% of non-Hispanic viewers. Of the young viewers, over a quarter of them are within the key buying demographic (18-34). Moreover, 16% of them are in the 2-17 demo—a group vital to growth and long-term sustainability. For non-Hispanics, about 10% of viewership stemmed from the 2-17 demo.

“In essence, Spanish-language networks reached their main audience by televising soccer matches, but with the added benefit of bringing in adjacent English-speaking crowds as well,” Nielsen noted in its report.

It should be noted that fútbol doesn’t just appeal to Hispanic viewers. In 2017, at least a quarter of all measured races/ethnicities watched soccer, including 30% of African-American viewers and 25% of Asian-American viewers, the firm found.