AirTies reveals Wi-Fi ubiquity | Media Analysis | Business
By continuing to use this site you consent to the use of cookies on your device as described in our privacy policy unless you have disabled them. You can change your cookie settings at any time but parts of our site will not function correctly without them. [Close]

Offering aggregated, real-world data about key usage patterns for in-home Wi-Fi, managed Mesh solutions provider AirTies has revealed that its technologies are now seeing use by more than 50 operators on four different continents in more than 25 million homes. 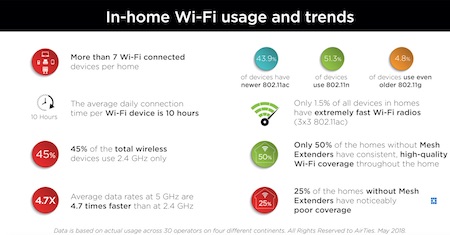 The data showed that the average home now has more than seven Wi-Fi connected devices, and the average daily connection time per Wi-Fi device is ten hours, making Wi-Fi one of the most used services in the home. Yet AirTies also found that in homes without Wi-Fi mesh extenders, only half of have consistent, high-quality Wi-Fi coverage throughout the home, and a quarter have noticeably poor coverage.

Within the average home, nearly 45% of devices use only 2.4 GHz Wi-Fi channels, while 55% have dual band Wi-Fi chipsets that can operate at 2.4 GHz or 5 GHz. This says AirTies is important because data rates at 2.4 GHz are noticeably slower. The company calculates that based on observed data speeds, data rates at 5 GHz are almost five times faster than on 2.4 GHz.

The bottom line of these findings says AirTies is that they show the critical importance of network-based client steering technology that can steer devices from 2.4 GHz to 5 GHz channels. It adds that proactively steering the 55% of 5 GHz capable devices to 5 GHz not only can improve the speed of those devices by nearly 5 times, but also frees capacity at the more congested 2.4 GHz, which in turn improves the performance of older legacy devices in the home. Relatedly, in households with 5GHz devices, DFS spectrum-sharing with radar channels is used 80% of the time, demonstrating the importance of choosing in-home Wi-Fi systems that are capable of taking advantage of DFS, in order to maximise performance at 5 GHz.

Separately, AirTies conducted a customer survey of Wi-Fi decision makers at more than a dozen leading service providers who have deployed an AirTies Managed Mesh Wi-Fi solution. The company says that that three-quarters reported a decrease in churn since using its technologies and four-fifths agreed that there has been an increase in customer satisfaction after deployment.