Apple enhances 4KTV experience with tvOS 12 | 4K/UltraHD | News | Rapid TV News
By continuing to use this site you consent to the use of cookies on your device as described in our privacy policy unless you have disabled them. You can change your cookie settings at any time but parts of our site will not function correctly without them. [Close] 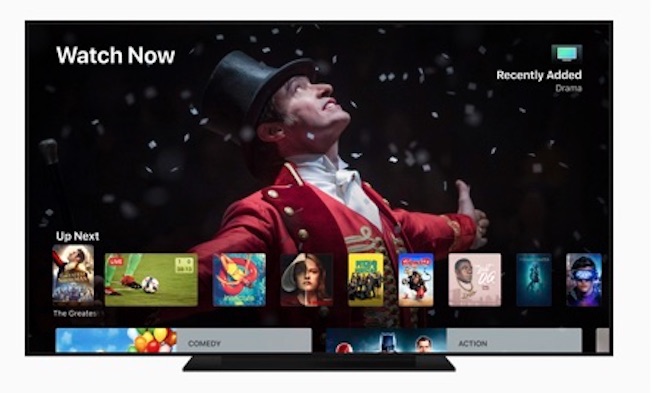 The CE giant believes that Apple TV 4K has been a hit since its debut in the Autumn of 2017 and is confident that the upgrade — which includes support for Dolby Atmos audio and new features to access more easily films and TV shows — will take this even further. Later in 2018, Apple says that its iTunes service will now be will the home to the largest collection of Dolby Atmos-supported movies anywhere, and these titles will also include Dolby Atmos audio for free. With tvOS 12, the company claims that Apple TV 4K will be the only streaming player both Dolby Vision and Dolby Atmos certified, delivering the highest quality cinematic experience of 4K HDR visuals and immersive sound.

One of the key current features for the Apple TV service has been single sign-on for Apple TV and iOS which has allowed users to sign in once to get access to all the video apps available through their cable subscription. With tvOS 12, Apple says that it is further simplifying the authentication process with zero sign-on. Apple TV will detect users’ broadband network’ and then automatically signs them in to all the supported apps they receive through their subscriptions.

Zero sign-on begins with Charter Communications, the second-largest cable operator in the US, which will begin offering Apple TV 4K to its customer base of nearly 50 million households offering access to live channels and on-demand programmes via an all-new Spectrum TV app on Apple TV 4K, the iPhone and the iPad, integrated with Siri and the Apple TV App. As part of this collaboration, Charter will also be offering iPhone and iPad to customers as they grow their mobile presence. Charter joins AT&T’s DirecTV Now in the US, Canal+ in France and Salt in Switzerland.

The tvOS developer preview is available immediately for Apple Developer Programme members at developer.apple.com and the new tvOS will be available in the third quarter of 2018 as a free software update for Apple TV 4K and Apple TV 4th generation.
Tweet