OLED leaps while LCD TV shipments show marked rise in first quarter | 4K/UltraHD | News | Rapid TV News
By continuing to use this site you consent to the use of cookies on your device as described in our privacy policy unless you have disabled them. You can change your cookie settings at any time but parts of our site will not function correctly without them. [Close]

A push from the forthcoming World Cup in emerging regions has seen global LCD TV shipments grow by 7.9% annually in the first quarter of 2018 says research from IHS Markit. 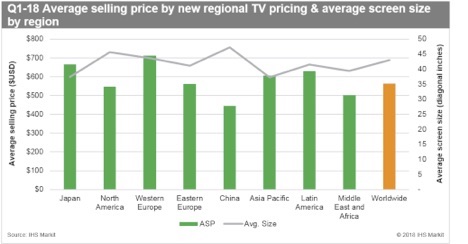 According to the latest TV Sets Market Tracker report, this represents a universe of 50.6 million units with liquid-crystal display (LCD) TV shipments rising 7.5% to 50.1 million units and organic light-emitting diode (OLED) TV shipments jumping 115.8% to about 470,000 units during the same period.

Looking at drivers for the push, and a turnaround from the annual falls seen in 2017, declines in LCD panel prices during late 2017 and early 2018 have said the analyst led to better end-market pricing in the first quarter of 2018. In addition, it noted that TV brands have increased shipments in advance of the 2018 World Cup for promotional activities in some key emerging market regions.

TV shipments in Latin America soared by 40% year-on-year in the first quarter of 2018, with a significant increase in 50-inch and larger TV shipments. As a result, Latin America had the highest average selling price among emerging market regions, according to available regional TV pricing information by surveying more than 100 retailers across 34 different countries. “Emerging markets like Latin America typically see strong seasonal response to the World Cup,” explained IHS Markit executive director Paul Gagnon. “Particularly in Eastern Europe, with the World Cup taking place in Russia this summer, demand is expected to rise in the region.”

China had the lowest average selling price among the eight regions covered in the report at $446, despite having the largest average screen size at 47.3 inches. “Lower LCD panel prices are enabling more aggressive pricing competition among local brands in China,” Gagnon added. Western Europe had the highest average price at over $712 on a price-per-inch basis, with less severe pricing competition and the second highest 4KTV mix among the regions.
Tweet