Rapid TV News - SVOD services top TV for customer satisfaction
By continuing to use this site you consent to the use of cookies on your device as described in our privacy policy unless you have disabled them. You can change your cookie settings at any time but parts of our site will not function correctly without them. [Close]

Another clear example of the pressure that is now piled on subscription TV providers has been shown in the latest American Customer Satisfaction Index showing streaming now dominates in terms of fulfilment. 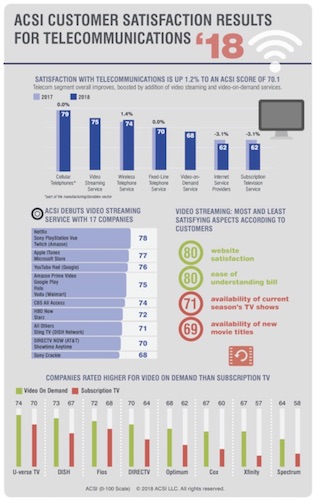 The marked the debut of streaming services which scored a mark of 75, well above the subscription TV’s score of 62, a 3.1 percentage point decline over the last year, and an eleven year low for the industry.

By contrast the video streaming services were the highest-performing industry measured, receiving high marks for ease of understanding the bill (80), website satisfaction (80), and call centres (75). Customers though did not rate them on availability of the current season’s TV shows (71) and availability of new film titles (69). VOD viewers were pleased with the number of TV shows (75), current seasons (74) and variety by category (74) available.

However, the availability of a past season’s shows was seen to be lacking (69) as were free on-demand content (69) and film movie titles (68). Call centres received the lowest marks (67), but in this segment they performed better for on-demand customers than for internet and subscription TV.

SVOD leader Netflix, Sony PlayStation Vue, and Twitch led the pack, tying at a score of 78. Apple iTunes and the Microsoft Store were second place at 77, and YouTube Red in third at 76. Amazon Prime Video, Google Play, Hulu, and Vudu all hit at the industry average of 75, closely followed by the network channel subscriptions: CBS All Access at 74, and HBO Now and Starz at 72. Interestingly, the recently launched skinny bundles of Sling TV (71), DIRECTV NOW (70) scored below the streaming average but higher than virtually all subscription TV services.

Attributing reasons why streaming services significantly outperformed subscription TV, ACSI Telecommunications Report 2018 report author and ACSI managing director David Van Amburg said: “Streaming services don’t have the hidden fees and six-month rates that subscription TV does, not to mention they’re cheaper and simpler. But because consumers don’t have many options when choosing a subscription TV provider, those businesses don’t see a lot of risk in customer dissatisfaction, and we’re unlikely to see dramatic changes any time soon. If you look at retail, airlines, and many other industries, companies like to reward customer loyalty, offering perks or discounts for doing business with them. Telecom is the exact opposite. In many ways, loyalty is punished because subscription TV is focused on customer acquisition and offering the best deal to lure customers away from competitors. In the long run, that doesn’t leave customers very satisfied.”

Most recent in Uncategorised