Netflix tops time for UK in-app mobile VOD viewing | Mobile | News | Rapid TV News
By continuing to use this site you consent to the use of cookies on your device as described in our privacy policy unless you have disabled them. You can change your cookie settings at any time but parts of our site will not function correctly without them. [Close]

Research from comScore has identified another first for Netflix, this time as regard the amount of time UK viewers spend watching video-on-demand systems from mobile apps. 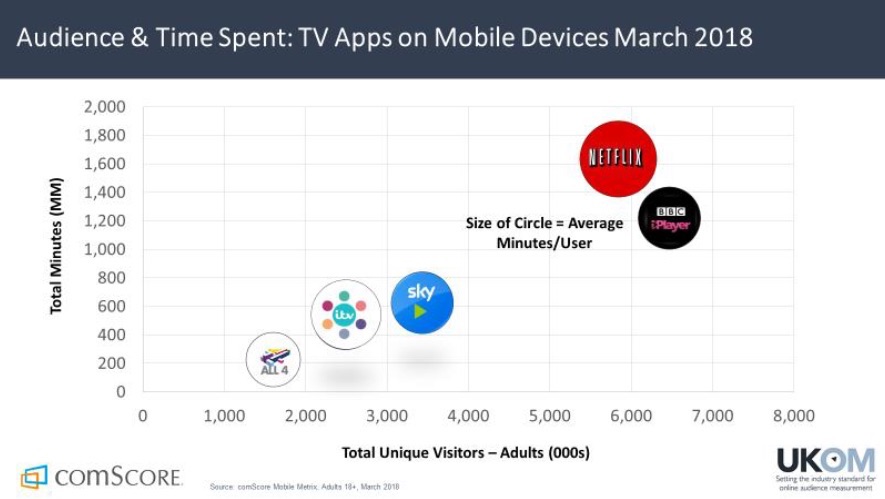 According to UKOM-approved comScore data taken for March 2018, 6.5 million adults visited the BBC iPlayer app to watch video on either a smartphone or tablet, edging out Netflix which attracted 5.8 million (17% of mobile internet users). Next were the Sky Go app with 3.435 million, ITV Hub (2.487 million) and All 4 (1.6 million).

Assessing the trends revealed, comScore said the demographic profile of app users might go some way to explain the differences in usage. It suggested that Netflix app visitors tend to be younger than visitors to the traditional broadcaster TV apps and the service has a much younger profile than the total mobile app universe. Indeed, it noted that 55% of adult Netflix app users are aged under 35 compared with only 37% of all app users. By contrast, fewer than two-fifths of the adult audience for BBC iPlayer, Sky Go and ITV are aged 18-34 and they make up only 47% of All 4’s mobile app users, which has the youngest profile of the traditional TV providers.

comScore’s research also suggested that there were also profile differences for both gender and presence of children. It added that example, given the significant presence of sport, it is probably no surprise that Sky Go was the only TV app which had a male bias attracting 54% of users.