Amazon drives direct-to-consumer TV network subscriptions market | Online Video | News | Rapid TV News
By continuing to use this site you consent to the use of cookies on your device as described in our privacy policy unless you have disabled them. You can change your cookie settings at any time but parts of our site will not function correctly without them. [Close]

The direct-to-consumer industry make be barely taking its first steps but there is now enough activity for it to be measured and says The Diffusion Group (TDG) Amazon Prime Channels accounts for more than half of all DTC subscriptions. 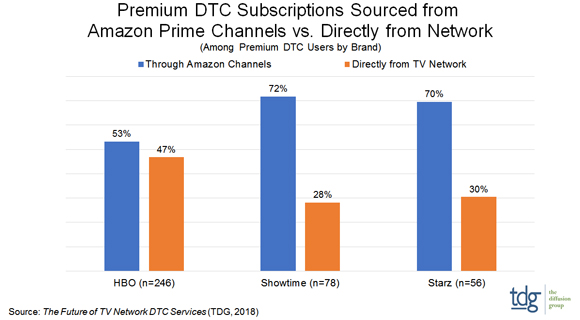 The Future of Direct-to-Consumer Video Services - Analysis & Forecasts, 2018-2022 research found that Prime Channels have a 55% share of DTC à la carte purchases, with its dominance standing out with premium DTC apps such as HBO, Showtime, and Starz. Indeed TDG found that more re than half of HBO DTC subscribers used Amazon Prime Channels to purchase their service. Rates were found to be even higher for Showtime and Starz, with seven-in-ten DTC subscribers using Prime Channels, and only three-in-ten using the TV network's website or app.

“While Amazon Prime Video continues to receive the lion's share of attention from industry media, Amazon has quietly built a stronghold in the burgeoning direct-to-consumer market,” observed TDG president Michael Greeson, “Even with Apple's pending entry into this space, we expect this dominance to expand further in the next five years.”

And the Future of Direct-to-Consumer Video Services - Analysis & Forecasts, 2018-2022 report added that the aforementioned pending entry could see the CE giant launch a new feature in its TV app that will offer à la carte DTC apps instead of purchasing from the App Store, thus mimicking the Amazon model and giving it a similar slice of subscription revenues from DTC ales, and a similar highly advantageous relationship with customers. Greeson speculated that is Apple did indeed repeat this formula, it could be very successful, especially given that TV network DTC subscriptions will increase four-fold in the next five years.

“And Apple would have a key advantage over Amazon Channels: it would not require a $120/year membership before one can aggregate a la carte purchases through its TV app,” he noted.
Tweet