BT launches new consumer business with Amazon Prime integration | Pay-TV | News | Rapid TV News
By continuing to use this site you consent to the use of cookies on your device as described in our privacy policy unless you have disabled them. You can change your cookie settings at any time but parts of our site will not function correctly without them. [Close]

UK incumbent telco BT has revealed what it calls its new converged network vison, bringing together the worlds of broadband, mobile, Wi-Fi and video services in one corporate identity. 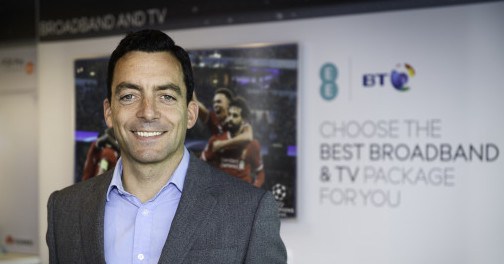 The new Consumer Business Unit comprises BT, EE and PlusNet and will see the launch of a series of converged products and service, including new streaming partnerships. The move is part of what BT calls an ‘open super integrator’ strategy that it believes will deliver and ‘unrivalled’ choice of content.

“BT runs the UK’s most advanced mobile and broadband networks, but our customers demand better connections, and the best service no matter where they are,” explained Marc Allera, CEO of BT's Consumer business. “We’re investing across BT, EE and PlusNet so that we can provide our customers with the widest choice of products and services, on the best networks, and with the best service in the UK. We’re beginning our journey to create one converged, smart network built on our world-leading fixed and mobile networks – going beyond 4G, 5G, Wi-Fi and ultrafast broadband to seamlessly connect our customers wherever they are to the things that matter most to them.”

And what will matter a lot will be TV content and the new move will see BT TV become the first UK company to include the Amazon Prime Video app as part of the EPG delivered through its set-top box. As well as offering access to Prime Originals such as The Grand Tour, The Man In The High Castle and Lucifer, the new BT TV app will also allow customers to download and plat content on the move for the first time. Amazon will now join arch rival Netflix as part of the BT TV EPG which will also see the arrival of Sky’s NOW TV package in 2019.

In time for the kick off of the next football season in August, EE customers will be able to access new BT Sport app features including the ability to cast content direct from a mobile platform to a TV with inclusive data. EE will also offer Google Chromecast as well as Apple TV to allow customers to make this more. There will also see a range of new mobile TV experiences launched over the next twelve months.

Commenting on the announcement, Paolo Pescatore, VP, multi-play and media of analyst firm CCS Insight said: “Arguably, the biggest partnership announcement is with Amazon...The move to support Amazon Prime video positions BT TV as an aggregator of content services including Netflix and Now TV from next year. We believe that this will turn around its fortunes given that BT TV has recorded losses for the last two quarters and subscriber growth over the last couple of years has been lacklustre.”
Tweet