Online media to overtake linear TV viewing time in 2018 | Media Analysis | Business | News | Rapid TV News
By continuing to use this site you consent to the use of cookies on your device as described in our privacy policy unless you have disabled them. You can change your cookie settings at any time but parts of our site will not function correctly without them. [Close]

Media investment group GroupM is predicting time spent with online media will overtake that spent with linear TV for the first time, globally, in 2018, gaining a 38% share, one percentage point more than the traditional platform. 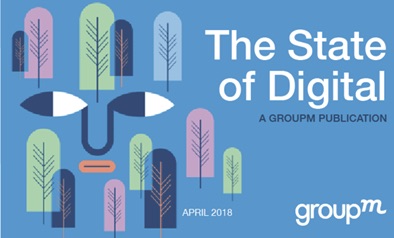 In its State of Digital report, the WPP subsidiary received e-commerce data from thirty-five countries in 2017 revealing cumulative transactions worth $2.105 trillion, representing growth of 17% over the prior year. GroupM predicts 15% growth in 2018 to $2.442 trillion or about 10% of all retail.

Among categories such as artificial intelligence and Blockchain, GroupM also examined programmatic (automated) ad investment trends. It found that on average across reporting countries, 44% of online display investment was transacted programmatically in 2017 versus 31% in 2016. This it says will rise to 47% in 2018. For online video investment, programmatic was revealed to be smaller; 22% in 2017 compared with 17% in 2016. This figure is predicted to rise to 24% this year.

Striking a note of caution, GroupM noted that because measurement of premium video audiences across platforms was in its opinion “woefully inadequate” in every market, it asked respondents to simply estimate the share of TV incumbents versus digital insurgents. This mean that the calculations showed that legacy TV players held hold three-quarters of all video hours but less than a third of online video hours.