Pay-TV, OTT partnerships shake up competitive landscape | OTT | News | Rapid TV News
By continuing to use this site you consent to the use of cookies on your device as described in our privacy policy unless you have disabled them. You can change your cookie settings at any time but parts of our site will not function correctly without them. [Close]

Competition in the US entertainment marketplace is evolving as partnerships between pay-TV and over-the-top providers within the video space have become more common. 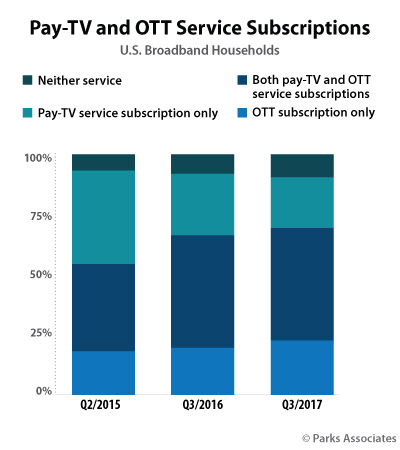 According to Parks Associates, partnership strategies between pay-TV operators and OTT providers can enhance the user experience while minimising the risks and marketing costs for each player.

"The nature of competition in video services has changed," said Brett Sappington, senior director of research, Parks. “Today, it is less about replacing competitors and more about how you complement others in the market."

Over a half of US broadband households have a combination of pay-TV and at least one OTT service, Parks Associates found. Also, the research found that approximately 33% of cord-cutters would have stayed with their service provider if offered a Netflix-style service bundled with broadcast-TV channels.

“Consumers are willing to carry multiple video accounts to get the content they want,” Sappington said. “Often they will select a preferred service with the content that they can't do without and then select other video services that complement the high-priority option."