Cord-cutting takes its toll on top pay-TV markets | Pay-TV | News | Rapid TV News
By continuing to use this site you consent to the use of cookies on your device as described in our privacy policy unless you have disabled them. You can change your cookie settings at any time but parts of our site will not function correctly without them. [Close]

Once a phenomenon affecting mainly the US, cord-cutting is carving swathes out of 13 other leading pay-TV arenas according to research from IHS Markit. 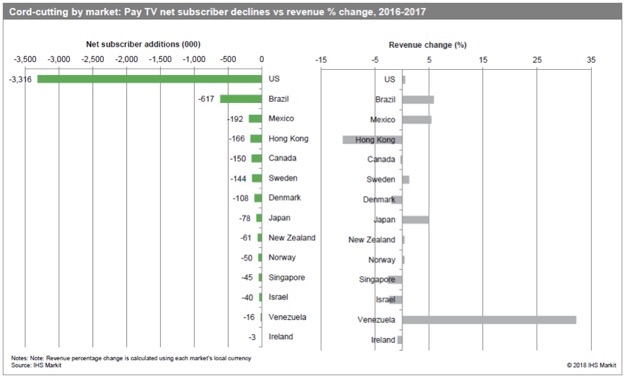 The analyst found that the 13 markets in which total pay-TV subscriptions declined last year, in addition to the US, were Brazil, Mexico, Hong Kong, Canada, Sweden, Denmark, Japan, New Zealand, Norway, Singapore, Israel, Venezuela and Ireland.

However, despite the flight of the subs, IHS Markit found that only six of the 14 markets affected in 2017 also experienced declines in pay-TV revenue. In eight countries — the US, Brazil, Mexico, Sweden, Japan, New Zealand, Norway and Venezuela — operators were able to compensate for customer loses by increasing the amount of revenue generated by their remaining subscriptions. Even in the US, where 3.3 million pay-TV subscriptions were lost in 2017, operators were able to collectively increase pay-TV revenue by relying on upselling and price increases.

Looking regionally, the survey revealed that with a net loss of 3.5 million subscriptions, North America suffered its biggest-ever annual pay-TV decline last year. Between 2012 and 2017, pay TV subscriptions fell by 7.1 million in the region. Meanwhile, net additions for Netflix and other over-the-top (OTT) subscription video services totalled 101.3 million over the same period, with more than 26 million OTT subscriptions added in 2017.

By platform, cord-cutting was impacting upon satellite TV in addition to its traditional prey of cable TV. The former declined more than any other platform in both North America and Latin America in 2017, suffering net losses of 1.8 million and 882,000, respectively.

“The cord-cutting woes of pay-TV companies in the US have been well publicised,” commented Ted Hall, director of research and analysis for TV and video at IHS Markit. “Although the rest of the world has been broadly resisting the trend, other markets have also experienced pay TV subscription losses. As part of their response to cord cutting, a growing number of pay TV operators are launching their own standalone streaming services to compete directly with offerings from Netflix, Amazon Prime Video and other OTT video companies. These virtual pay-TV alternatives to traditional pay-TV are more flexible and typically priced lower than operators’ core offerings. However, substituting pay-TV subscriptions for OTT is only a partial solution, as these services have lower average revenue per user and are therefore worth less to operators.”