Advertising industry needs to improve creativity and standardised measurement | Ad Tech | News | Rapid TV News
By continuing to use this site you consent to the use of cookies on your device as described in our privacy policy unless you have disabled them. You can change your cookie settings at any time but parts of our site will not function correctly without them. [Close]

While consumer attitudes towards advertising have stayed consistent over the last year, there remains an opportunity for marketers to improve creativity and holistic cross-platform measurement, advises the latest Kantar Media annual Dimension report. 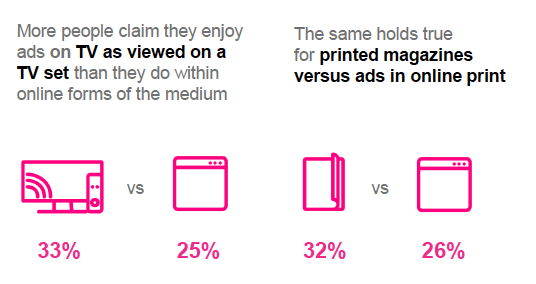 The second iteration of what is an annual survey explored the key communication planning, buying and measurement issues faced by the industry from the twin perspectives of the industry’s leaders, and the consumers they are trying to reach.

The survey found that established media forms remain resilient with 96% of respondents still accessing TV via a television set with 57% of 1,000 connected consumers believe advertisers are better at communicating with them now than in the past. However, this figure slipped two percentage points over the last twelve months, and more than three-quarters (77%) of consumers reported seeing the same ads over and over again. Even though technological changes have enabled advertisers to improve channels of communication, Kantar noted that there is still work to be done.

Just more than half (55%) of UK consumers stated that that the ads they see on websites are not usually relevant to them, 38% saying they dislike advertising and 53% say that they are ambivalent to it. As a result, said Kantar, ad blocking remains at similar levels to 2017, with 36% of UK consumers saying they use ad blockers sometimes, and 26% of 18-34-year-olds saying they always use them.

Kantar said that as far marketers should be concerned, cross-platform activity still presents a host of challenges for both creativity and measurement, in ensuring that advertising campaigns work across multiple platforms, and that the success of these campaigns can be properly measured.

“This year’s Dimension report reveals an industry struggling to make sense of the myriad of communication options out there,” remarked Kantar Media UK & Ireland CEO Richard Poustie. “ Marketers are exhibiting some scepticism of the role of digital in the media supply chain, with some of the big players going as far as moving advertising spend away from such platforms due to a lack of transparency...One clear trend is a momentum towards integration across platforms, with both brands and consumers increasingly active on numerous devices. We know from experience that advertising which delivers consistent messaging on multiple platforms and across paid, owned and earned forms of media, is highly effective at engaging consumers. It’s not surprising therefore that we are seeing a growing call for the establishment of a universal set of consistent, recognised measurement standards across platforms.”

The full report is available to download at: http://www.kantarmedia.com/DIMENSION/EN