Yahlive reaches 10MN North African homes | Satellite | News | Rapid TV News
By continuing to use this site you consent to the use of cookies on your device as described in our privacy policy unless you have disabled them. You can change your cookie settings at any time but parts of our site will not function correctly without them. [Close]

Yahlive is now delivering free-to-air satellite TV to 10 million households across Algeria, Tunisia and Morocco, according to the Abu-Dhabi based joint venture between SES and Yahsat. 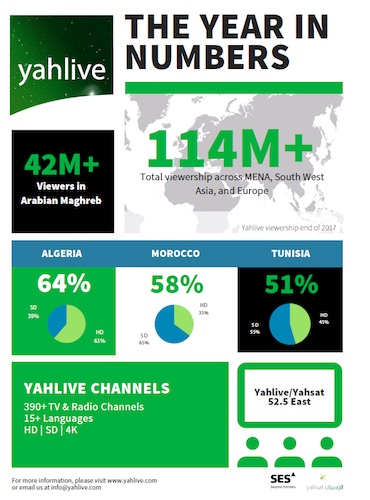 The company, whose reach covers the Middle East and North Africa (MENA), launched its first bouquet of Arabian Maghreb channels in November 2015, with 43 Algerian channels. It now provides more than 160 Arabic and French channels, of which 115 it claims as exclusive.

“Since inception, the Arabian Maghreb has been a key focus for us. We are thrilled to see our commitment to delivering a comprehensive range of premium television content, catered to the tastes of culturally diverse audiences and communities, gaining such widespread acceptance,” said Ammar Baranbo, chief operating officer, Yahlive. “Our efforts will continue to increase the available number of local and international premium TV channels year after year.”

Regional data from the SES Satellite Monitor is being presented at ASBU’s Radio & TV Festival in Tunis this week.
Tweet