‘Explosive’ growth in online video streaming | Media Analysis | Business | News | Rapid TV News
By continuing to use this site you consent to the use of cookies on your device as described in our privacy policy unless you have disabled them. You can change your cookie settings at any time but parts of our site will not function correctly without them. [Close]

Research from quality of experience (QoE) analytics provider Conviva has found that over the last year the audience for online video has seen ‘astronomical growth’ across films, episodic TV shows, live linear television and live sports. 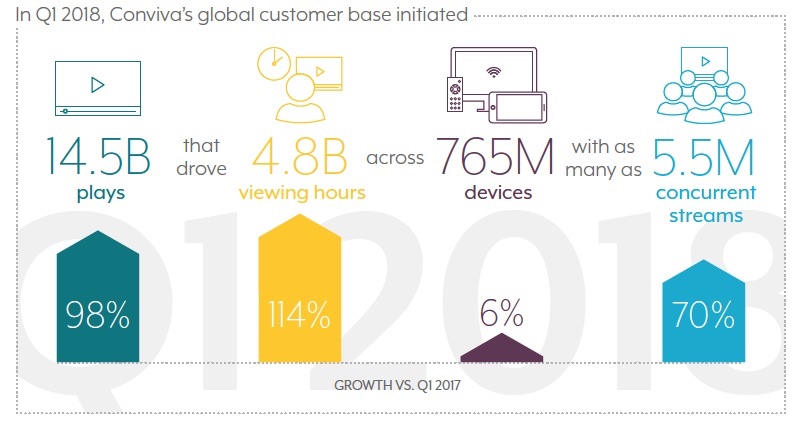 The latest in the company’s quarterly measurement reports on the state of over-the-top (OTT) and the streaming video market, covering both the quantity and quality of streaming viewership, found that viewing hours of Internet-delivered video across mobile, connected TVs and desktop screens grew by 114% in the first quarter of 2018 compared with the same period last year, with the total viewing hours reaching nearly five billion. Viewers were flocking to internet streaming on a global basis, but North America experienced the largest increase in viewing hours, up 174% annually.

The report also revealed evidence of what Conviva calls the ‘appification’ of TV and found that app-based plays grew four times faster than browser-based viewing on personal computers. The number of viewing hours via apps grew 136% since last year. Looking at the devices on which these apps were to be found, Conviva found that Apple TV saw 709% growth in viewing hours over the first quarter of 2017, outpacing all other devices by almost two times. During the same period, while total viewing hours on Roku devices saw a rise of 87%, its overall share of total viewing hours dropped by 3%. Viewership on mobile devices also evolved in the first quarter of 2018, with viewing hours on Android growing two-and-a-half times faster than on iOS devices.

What seems a crucial driving factor for this growth revealed in the report was the increased quality of services. The Conviva report discovered that the biggest improvement seen in Q1 2018 over Q1 2017 was the drop in the number of videos failing to start, bringing the global percentage to 2.34%, less than half of what it was in Q1 2017. Viewers in Asia saw the most improvement in the area, while viewers in North America saw about the same rate of video start failures as last year. In terms of bit rate, a crucial determinant of picture quality on various viewing devices, this in Q1 2018 reached nearly four megabits per second on average across all devices, a 29% improvement over the same period last year.