Global pay-TV market set to break 1.1BN subs barrier by 2023 | Pay-TV | News | Rapid TV News
By continuing to use this site you consent to the use of cookies on your device as described in our privacy policy unless you have disabled them. You can change your cookie settings at any time but parts of our site will not function correctly without them. [Close]

A study from Digital TV Research has forecast that the global pay-TV market is to add 95 million subscribers between 2017 and 2023 to take the global total to 1.10 billion. 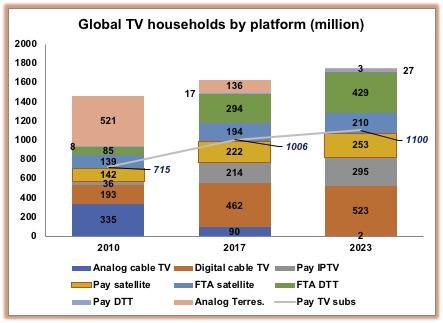 Based on forecasts for 138 countries, The Global Pay-TV Subscriber Forecasts report suggests that the number of pay-TV subscribers passed the billion barrier in 2017 and that growth will be mostly located within the IPTV market which will accelerate past satellite in 2018 and will account for 81 million of the additional subscribers by 2023.

In all, satellite TV is forecast to grow by 31 million subs and pay-DTT by ten million. Digital cable TV will add at 61 million subs between 2017 and 2023, but analogue cable TV will lose 88 million subs – meaning a net loss for cable. Digital TV Research found that there were still 90 million analogue cable TV subscribers by end-2017. Although this figure is down from 335 million in 2010, it still to the analyst represents a major hurdle for pay-TV operators to convert.

Commenting on the research, Simon Murray, principal analyst at Digital TV Research, said: “Some operators, such as Telefónica in Spain, are encouraging subscribers to convert to IPTV from other platforms. IPTV/broadband subs are more lucrative than satellite TV ones.”

The report adds that pay-TV subscriber numbers are falling in North America. It forecast 92 million pay-TV subs in the region by 2023; down by 20 million from 112 million in the peak year of 2012.
Tweet