US online video universe eclipses Europe | Online Video | News | Rapid TV News
By continuing to use this site you consent to the use of cookies on your device as described in our privacy policy unless you have disabled them. You can change your cookie settings at any time but parts of our site will not function correctly without them. [Close]

Internet users in the US are more likely to watch online video on a daily basis, particularly on a smart TV or smartphone, according to research from Ampere Analysis. 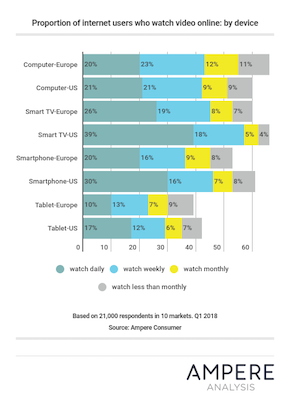 Ampere observed that the overall proportion of daily viewers in both the US and Europe has declined slightly. Just over a quarter of Internet users in the US watched online video on a daily basis in Q1 2018 on a smartphone, compared with 19% in Europe.

The much-heralded phenomenon of binge-watching was revealed in the survey to be much more common in the US. The proportion of Internet users who strongly agree they frequently watch several episodes of the same TV show back-to-back was 22% in the US and 15% in Europe. Overall, 63% in the US agree they frequently binge, compared with 51% in Europe. “Binge viewing is now standard practise for most US viewers, and European consumers are rapidly following suit,” remarked Richard Broughton, director at Ampere Analysis.
Tweet