BBC comedy format heads up Argonon International’s MIPTV slate | Deals | News | Rapid TV News
By continuing to use this site you consent to the use of cookies on your device as described in our privacy policy unless you have disabled them. You can change your cookie settings at any time but parts of our site will not function correctly without them. [Close]

As it aims to show off its wares to a global audience at the leading content fair, UK distributor Argonon International is launching Ready or Not, a unique new comedy entertainment format at MIPTV. 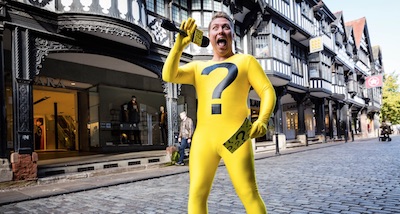 Produced by UK production company Remedy Productions, the 30-minute family entertainment show debuts on BBC One in a Saturday access prime time slot on 31 March. The hybrid format combines a hidden camera prank show with a play-along game and is claimed to offer a ‘hilarious, fast-paced twist’ to the traditional gameshow concept. Instead of inviting contestants to a studio, the show goes out to them, ambushing unsuspecting members of the public as they go about their daily business asking them to answer quiz questions for the chance to win cash.

“Remedy Productions has created a really unique format in Ready or Not and we are really looking forward to presenting it to buyers at MIPTV,” said Cecilie Olsen, SVP sales and acquisitions at Argonon International. “Aside from being ideal for family audiences it’s also a perfect vehicle for broadcasters to showcase new comedy talent. The different comedy segments also work perfectly in a digital environment, creating huge viral potential.”