Rapid TV News - NBCU, Fox, Disney most preferred US network families for skinny bundles
By continuing to use this site you consent to the use of cookies on your device as described in our privacy policy unless you have disabled them. You can change your cookie settings at any time but parts of our site will not function correctly without them. [Close]

In rankings that the analyst says offer important insight into the viability of direct-to-consumer (DTC) services, broadcast networks top the list for most desired channels groups in the US, according to The Diffusion Group (TDG). 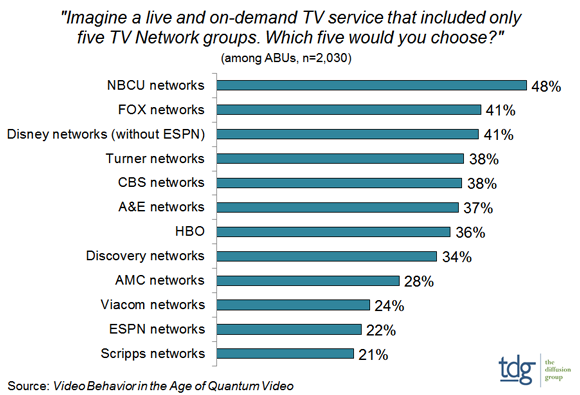 In its study, Video Viewing Behavior in the Age of Quantum Video, TDG examined preferred network groups by demographics and video behaviour, asking 2,030 connected consumers as to the five network families they'd prefer to have included in a five-group skinny TV plan. It found that despite declines in viewing, the leading four broadcast network groups occupy four of the top five spots, led by NCBU (selected by 48%), followed by Fox (41%), Disney/ABC (41%) and CBS (38%).

“Live Big-4 broadcast viewing is diminishing, as with virtually every major network. This should not imply, however, that their death as brands or as major forces in consumer video is inevitable,” explained Michael Greeson, director of research at TDG. “The value of their content is immense; top of mind for many viewers.”

Interestingly, the ESPN family failed to rank in the top ten, something that says TDG makes Disney's decision to make ESPN Plus a premium add-on to its linear ESPN channel a wise move. TDG suggested that ESPN Plus may be best positioned as a value-add to its live linear pay-TV service, Disney's family-focused DTC service appears destined to follow in the footsteps of CBS All Access - that is, serve as a full-on replacement to its linear channel, with a growing number of high-value titles reserved for the DTC service.

“Many expected ESPN Plus to be the online equivalent of ESPN, but Disney decided that the risk of cannibalising high-value linear pay-TV subscriptions would create substantial channel conflict and hasten the declines in pay-TV subscriptions,” added Greeson. “This risk is inherent in the DTC model and must be addressed group by group, even channel by channel.”

The analyst also believes that the standings revealed in the report offer important insight into the viability of a new vMVPD entrant, Philo, which is populated by the channels of A&E, AMC, Discovery, and Viacom. While the analyst accepts that at first glance the offer may seem too specialised to gain mass appeal separate from a broadcast bundle, it noted that a combination of networks may prove attractive given that A&E was selected in the survey as top-five by 37% of connected consumers, AMC by 28%, Viacom by 24% and Scripps by 21%.

“The potential is there, but having to pay $16-$20/month for a TV service without the big four broadcasters and live sports may prove a bitter pill to swallow,” Greeson concluded.
Tweet