Scandinavian SVOD soaring | VOD | News | Rapid TV News
By continuing to use this site you consent to the use of cookies on your device as described in our privacy policy unless you have disabled them. You can change your cookie settings at any time but parts of our site will not function correctly without them. [Close]

Research from Kagan has revealed that the Nordic market for subscription-based online video services has grown considerably over the last few years in both subscriptions and revenues, increasing its share of total consumer spend for subscription entertainment from 18% in 2016 to 22% in 2017. 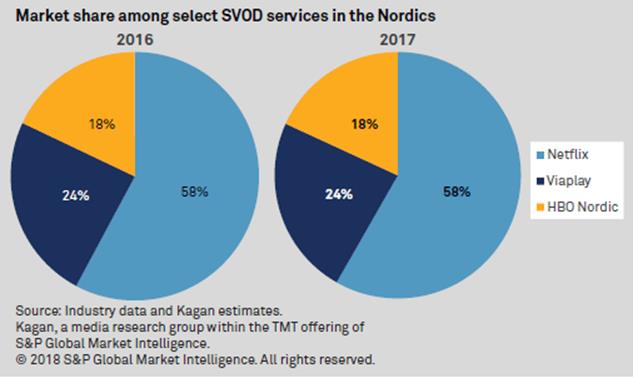 The media research group within S&P Global Market Intelligence found that primary growth drivers for subscription video-on-demand (SVOD) in Sweden, Denmark, Norway and Finland were the availability of quality content, affordable high-speed broadband and a high level of English proficiency among the population.

The Nordic markets, with the exception of Finland, had a significantly higher ratio of SVOD subscriptions to broadband homes than the UK, which represents Europe's most developed online video market, with penetration rates above 75%. In the case of Finland, the increase in mobile broadband uptake has led to a decline in fixed-line connections over the last few years, which accounts for the relatively high penetration rate of 89%.

Looking at which companies were forging ahead in the market, the survey showed that the majority of the growth in the region has been fueled by global heavyweights such as Netflix and HBO, which over the last year have managed to maintain a combined 76% share of the subscriptions market among the top three services in 2017. The bulk of the rest of the growth came from Modern Times Group's Viaplay.

Kagan calculated that from 2016 to 2017 paid SVOD subs in the Nordics have grown 23% on average for Netflix, 24% for HBO Nordic and 19% for Viaplay. Following a successful year in Sweden with a 90% increase in subscriptions, where it is considered strong competition to Viaplay, C More launched in Finland in early 2017.

Furthermore, the Kagan study found that Netflix ended 2017 with 4.2 million subscribers, or 23% year-over-year growth. Viaplay had 1.7 million paying customers in all four countries combined by the same time. HBO Nordic was found to have grown b24% year-over-year, attracting 1.3 million subs in 2017. In Denmark, TV 2 Play has managed to capture the second spot in terms of subscribers, following Netflix. TV 2 Play, owned by Denmark's largest broadcaster TV 2 (DK), reached approximately 390,000 paying customers in 2017.
Tweet