MWC 2018: connected TV online video advertising to reach €825MN by 2020 | Ad Tech | News | Rapid TV News
By continuing to use this site you consent to the use of cookies on your device as described in our privacy policy unless you have disabled them. You can change your cookie settings at any time but parts of our site will not function correctly without them. [Close] 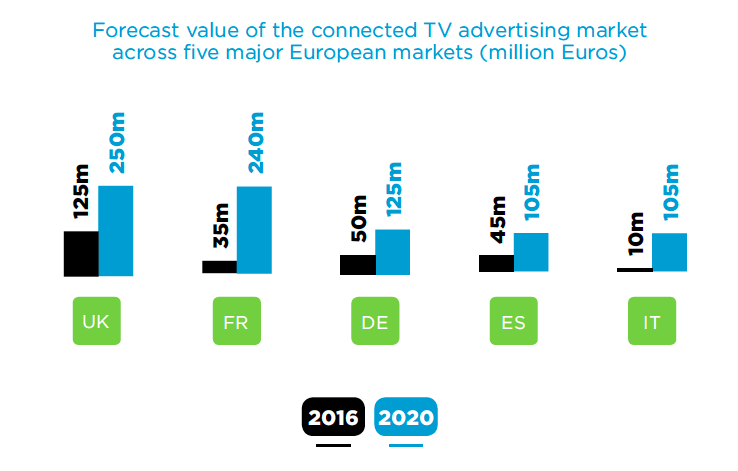 Connected TV advertising in Europe is set to spike over the next few years with the UK predicted to generate the largest revenue while Italy is set for the fastest annual growth amongst the top five European countries, says research from SpotX.

The leading video advertising and monetisation platform studied the growth of advertising on connected TV, defined as content served to the TV screen via the open Internet through devices including smart TVs, game consoles, streaming media services such as the Amazon Fire Stick, Chromecast and Apple TV, and pay-TV subscriptions.

The research, conducted by research and strategy consultancy MTM, found that broadcasters are embracing the cross-device mind-set of their digital-first audiences and that advertisers are now recognising the impact of their advertising appearing on the TV screen to targeted audiences. It predicted that overall the market is set to grow 200% from €225 million in 2016 to €825 million in 2020.

Looking at drivers, the study showed that the advancement of advertising-funded video-on-demand (AVOD) technology and the desire from brands and agencies to advertise alongside premium programmes has increased steadily, and that the market is now set for rapid growth across the big five TV advertising markets in Europe.

The UK is currently Europe’s largest market for connected TV advertising, expected to be worth €250 million in 2020. SpotX predicts that this market will have a 19% compound annual growth rate (CAGR) to 2020 which will be achieved through increased user engagement with connected TV technology combined with broadcasters’ commitment to providing market leading services such as the ITV Hub and BBC iPlayer.

With a strong culture of IPTV, France is set to have the second highest connected TV advertising revenue with industry experts anticipating €240 million to be generated by advertising delivered via the open Internet to the TV screen in 2020. SpotX adds that market drivers such as good broadband penetration and speed are in place to sustain this growth and predicts that broadcasters will increase their investments into connected TV apps and services.

Italy is predicted to show rapid connected TV advertising growth, with participants in the research predicting an 80% CAGR between 2016 and 2020, being worth €105 million in two years’ time, from €10 million in 2016. Developments in audience measurement are said to be the signal the Italian industry is preparing for adoption as consumer interest in video-on-demand (VOD) increases.

In the other key markets, Germany, where half of households have a smart TV, is set to grow from €50 million in 2016 to €125 million in 2020 with a CAGR of 24%, followed by Spain with growth expected to reach €105 million in 2020, which will equal revenues generated in Italy. Spain will see a predicted CAGR of 24% driven by demand from advertisers and agencies for connected TV inventory and by increased penetration of smart TVs in the market.

Commenting on the Connected TV Advertising Opportunity in Europe report, Mike Shehan, SpotX co-founder and CEO, said: “The data shows the dramatic rise of adoption of connected TV advertising across Europe, reflecting the growth we have experienced already in the US. The story in the [research] has been reflected by our own expansion at SpotX working with leading European innovators such as STV, TV Player, Zattoo, The Box and Dugout on their strategies for global connected TV advertising revenue.”