Star renews content deal with OSN | Deals | News | Rapid TV News
By continuing to use this site you consent to the use of cookies on your device as described in our privacy policy unless you have disabled them. You can change your cookie settings at any time but parts of our site will not function correctly without them. [Close]

Star TV has expanded its carriage deal in the Middle East and North Africa (MENA) with pay-TV platform OSN. 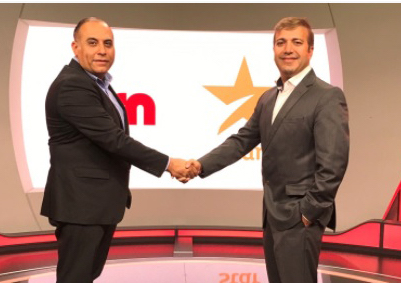 OSN Pehla subscribers will be able to watch the South Asian fare both live and on demand on OSN Play.

"The extension of OSN's long-term partnership with Star reinforces our commitment to continue to deliver leading content from the subcontinent for South Asian expatriates in MENA on OSN Pehla. Additionally, the introduction of the new movie channel, as part of this renewed agreement, adds increased value for customers," said Emad Morcos (pictured, left), chief content officer, OSN.

Star Middle East, Africa and APAC business head Sudhir Nagpal (pictured, right) added: "The renewal of Star's long-standing association with OSN is a testament to Star's commitment towards delivering world-class entertainment to South Asian audiences in the region. Star, with its multilingual portfolio, will continue to drive local relevance and be the one-stop solution for South Asian entertainment".