Viacom18 readies Tamil channel for launch | Broadcast | News | Rapid TV News
By continuing to use this site you consent to the use of cookies on your device as described in our privacy policy unless you have disabled them. You can change your cookie settings at any time but parts of our site will not function correctly without them. [Close] 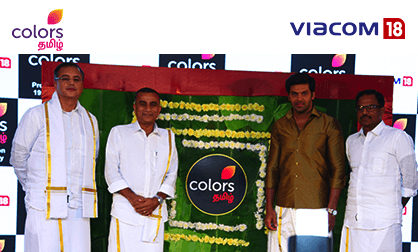 The channel, operated by the TV18 and Viacom joint venture, will offer 22 hours of weekly original content at launch, with Tamil superstar Arya acting as brand champion.

Ravish Kumar, head, regional entertainment – Viacom18, said that Tamil Nadu, India’s sixth most populous stake according to the 2011 census, has a per capita daily TV viewing figure of about three hours. By comparison, the Hindi speaking markets watch around 2.5 hours daily.

“With an estimated base of 1,150 advertisers, Tamil Nadu is one of the more lucrative broadcast entertainment markets in India,” Kumar said."Our biggest drive is to deliver new and never before seen content to the Tamil audience. We have invested big in conceptualising programs that are inspiring, innovative, experimental and technically sound,” he added.

“After spreading our wings across seven languages, India’s flagship general entertainment brand – Colors – is entering the lucrative, fast growing and discerning Tamil entertainment market – in line with our stated strategy to drive regional growth aggressively. Our proven ability to break the clutter and disrupt the status quo will help us tell endearing stories to over 20 million TV households in the state and a large global audience in the coming months and years,” added Sudhanshu Vats, group CEO – Viacom18.