Streaming boosts NBC’s Pyeongchang Olympics opening ceremony coverage | Ratings/Measurement | News | Rapid TV News
By continuing to use this site you consent to the use of cookies on your device as described in our privacy policy unless you have disabled them. You can change your cookie settings at any time but parts of our site will not function correctly without them. [Close] 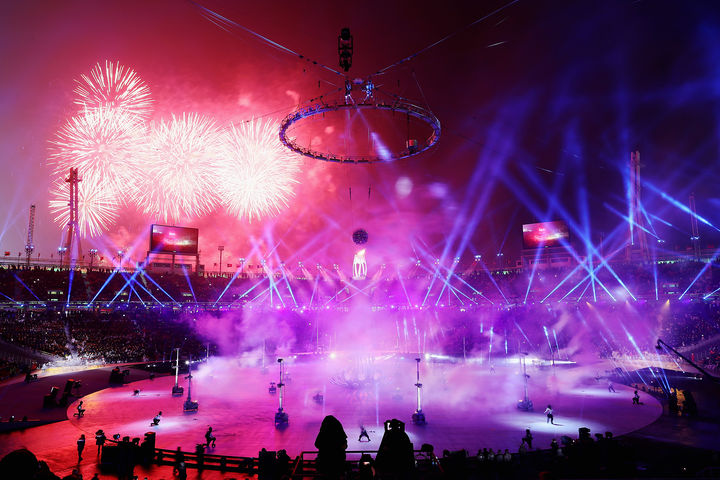 Initial live plus same day fast national measurement data released by Nielsen and digital data from Adobe Analytics have found that US broadcaster NBC attracted 28.3 million viewers for the unveiling of the Winter Olympics in Korea.

With out of home viewership data yet to be revealed, NBC claims that with its 14.7/27 primetime household rating for the Opening Ceremony it outperformed by 167% the combined rating of ABC, CBS and FOX for the night (5.5), ranking as the most-dominant Friday in People Meter History (September-May TV season) since 1987. The NBC television viewership also marked the largest audience on a Friday night in four years, a stretch that included four Friday World Series games, two NBA Finals games, three nights of 2016 Rio Olympics coverage and two nights of the Sochi Olympics. The Opening Ceremony viewership on NBC peaked at 31.5 million from 9pm to 9.15pm ET, as Team USA entered during the Parade of Nations and overall viewership was up 6% compared with the same part of the 2016 Rio Olympic Games opening ceremony.

Digital platforms also scored for NBC Sports. NBC Olympics had made available the full, unedited world feed of the Opening Ceremony of the XXIII Olympic Winter Games for viewing any time on NBCOlympics.com and the NBC Sports app. The streaming coverage — live at 6am ET and simultaneous to the NBC primetime show — on NBCOlympics.com and the NBC Sports app delivered an average minute audience of 449,000 viewers – more than double the audience for the Rio Opening Ceremony (181,000). NBC Sports Digital’s full-day streaming total of 64.2 million live stream minutes exceeded the total of 16 of the 17 competition days in Sochi. However, the Sochi opening ceremony was not streamed.

“The Opening Ceremony was a terrific show, which we hope will only be topped by the excitement generated by the athletes and competition over the next few weeks,” said Mark Lazarus, chairman of NBC Broadcasting & Sports. “American audiences continue to be interested and excited for the Games, and the early consumption results show that our multiple platform strategy is dominating the media landscape.”

NBC’s Pyeongchang presentation was the third most-watched non-live Winter Olympics opening ceremony beaten only by Lillehammer in 1994 which attracted 33.8 million viewers on CBS and Sochi four years ago, which had 31.7 million.

Poring over the figures to date, Mike Bloxham, senior vice president of global media and entertainment at research firm Magid, said that it was important to note that NBC was taking a different route than previous such broadcasts, between a smaller ad load and a greater emphasis on live streaming.

“NBC is currently on a revenue high with the Super Bowl and the Winter Olympics coming in quick succession. There is no shortage of advertisers looking to stake their claim on inventory for these two tent pole TV events and the network is reaping the reward,” he said. “Alongside NBC, a number of others in the industry, including Turner and Viacom, have been experimenting with reduced ad loads over the last 12 to 18 months. It's still early days but the research that is starting to emerge suggests that viewers are responding positively to a better experience and that there is some positive impact on ad effectiveness. With events like the Olympics, NBC has the opportunity to bring the benefits of these experiments to one of TV’s biggest sporting properties.

“Live streaming isn't new and in recent years we've seen it grow, but only now is it starting to become an endeavour that major TV companies are starting to leverage. Events like the Olympics will be part of what helps livestreaming become a mainstream part of how the mass audience engages with tent pole events and their content of choice. While there is always an early challenge to fully monetise any emerging media opportunities like live streaming, NBC has the opportunity here to leverage demand for association with the Olympics to create integrated cross-platform packages that deliver audiences to advertisers in a fully 360 fashion. In short, live streaming the Olympics can only be good for viewers, for NBC and the advertisers that take advantage of it, not to mention the cause of live streaming itself.”