Telefónica launches Movistar Series in LATAM | Programming | News | Rapid TV News
By continuing to use this site you consent to the use of cookies on your device as described in our privacy policy unless you have disabled them. You can change your cookie settings at any time but parts of our site will not function correctly without them. [Close]

Telefónica has announced it will start distributing Movistar+ original series in LATAM by launching a themed, pay-TV network in the region called Movistar Series. 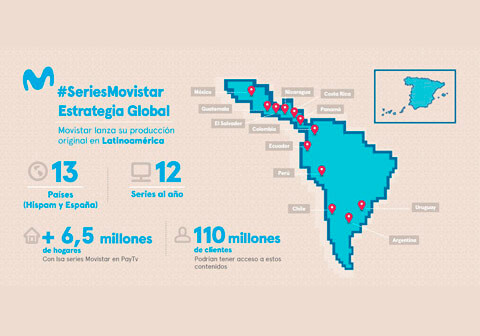 Through Movistar TV and the streaming platform Movistar Play, the telco’s in-house series will initially be available in Chile, Colombia, and Peru, already on February 15, followed by Argentina, Costa Rica, Ecuador, El Salvador, Guatemala, Mexico, Nicaragua, Panama and Uruguay in the next few months.

Mimicking its strategy in Spain, Movistar Series will premiere 12 original series throughout 2018 in the selected LATAM territories and will also broadcast Spanish-speaking content produced by third parties.

“We will become a platform of platforms in Latin America, offering the best content in the market, but that will also have differential attributes that make our value proposal unique and distinguished by its quality. We believe that there is enormous potential for a platform of quality content made in Spanish, and we want Movistar Series to become the benchmark channel for this content,” said Michael Duncan, CEO of the Telefónica Global Consumer Unit.

“The operation that is being announced today will make it possible for the Movistar series to arrive in more than 13 countries in 2018, making it possible to reach 3.8 million pay-TV customers in Spain and more than three million in Latin America. The over 110 million Movistar mobile clients in the region will also have access to this content,” added Movistar+ president Sergio Oslé.

La Peste, which has already aired in Spain, will be the first original series to premiere on Movistar Series LATAM. The remaining fictional series to follow during 2018 are Felix, starring Argentinean actor Leonardo Sbaraglia, Matar al Padre, Gigantes, Arde Madrid, and Virtual Hero.