4KTVs build market presence as global LCD TV shipments fall to three-year low | 4K/UltraHD | News | Rapid TV News
By continuing to use this site you consent to the use of cookies on your device as described in our privacy policy unless you have disabled them. You can change your cookie settings at any time but parts of our site will not function correctly without them. [Close]

In what may be an indication of a bottleneck in the development of TV industry, global shipments of branded LCD TV sets for 2017 totalled 211 million units, a decrease of 4.1% compared with the previous year, according to research from WitsView. 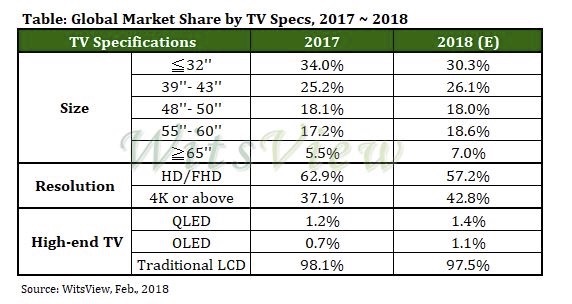 Yet even though this is a low last seen in 2014, the analyst believes that the industry is generally optimistic with TV brands set to focus on large-size, high-resolution products, especially the 4KTV sector, developing high-end products like QLED and OLED TVs, hoping to push sales and regain profits by specifications upgrade.

Looking at the product plans of major TV brands, WitsView notes that the likes of Samsung, LG and Sony are now actively developing their product mix of large-size TV sets (65”, 75” or greater). It calculates that the proportion of TVs 65” in size or greater will increase from 5.5% in 2017 to 7 % this year. WitsView also observes that BOE’s Gen 10.5 fab will offer 65” and 75” panels to the market after Q118, something which may lower TV makers’ costs of purchasing large-size panels.

In terms of resolution upgrade, WitsView expects the market share of high-resolution (4K or higher) products to reach 42.8% in 2018, up from 37.1% at the end of last year, adding that more than 95% of the 55” or above products use 4K resolution.

WitsView also believes that as the market share of large-size 4KTVs increases, TV vendors will begin to concentrate more on 8KTVs. Yet it cautions that as the supply chain for both hardware and software, such as image processing chip, signal interface, 8K signal source and content etc, has not been well developed, WitsView estimates that the penetration rate of 8K products in global TV shipments will be only 0.2-0.3% in 2018. The penetration is expected to increase to 1.5% in 2020 due to the influences of Tokyo Olympics, and to 5% in 2022.

Also, at the high-end, WitsView sees OLED TVs and QLED TVs remaining as two competing camps. Led by Samsung Electronics, the QLED camp will maintain an overall higher market share than the OLED camp. On the other hand, the analyst calculates that OLED TVs will raise the market share to 1.1% in 2018 as LGD expands its production capacity, gradually narrowing the gap with QLED camp. As for the future development of high-end TV, WitsView expects QD Pixel, a new technology for QLED camp, to reduce QLED TV's high costs. That said, its current development remains slow and solutions will likely not be available until 2019.

Even though, concluded WitsView, Gen 10.5 fabs have accelerated the production expansion of large-size LCD panels, lowering the prices as the result, the costs of OLED panels remain high, and the development of 8K OLED panels remains slow, making OLED TV less competitive in the market.
Tweet