YouTube close to saturation in UK | Online Video | News | Rapid TV News
By continuing to use this site you consent to the use of cookies on your device as described in our privacy policy unless you have disabled them. You can change your cookie settings at any time but parts of our site will not function correctly without them. [Close] 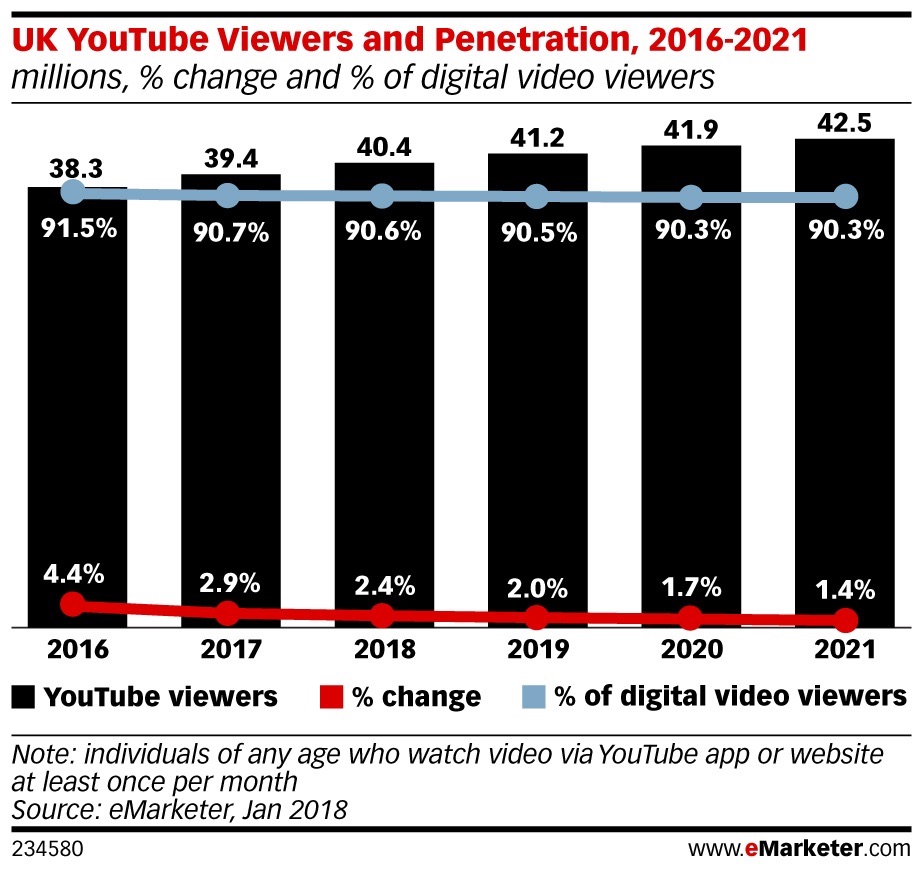 Research from eMarketer has revealed that YouTube viewing is close to saturation in the UK, with more than 90% of digital video viewers regularly visiting the platform.

eMarketer’s first ever YouTube forecast found that the Google platform was benefiting from being in a market with a huge appetite for online video with the proliferation of smartphones and the rise of streaming services such as Netflix, Amazon Prime and Hulu, making watching video over the Internet commonplace in the UK. eMarketer believes that in 2018, more than two-thirds of the UK population will be watching some form of digital video. In addition, close to two-thirds (64.3%) of digital video viewers in the UK are expected to view content via mobile phone.

Examining YouTube’s specific dominance, eMarketer also found that ubiquity across the platform and easy integration on other content platforms were key driving factors in achieving the huge current uptake, and the analyst predicts that 40.4 million people, or three-fifths of people in the UK, will watch video via the YouTube app or website at least once per month.

Yet despite its current commanding market position, eMarketer warned that YouTube would not only face stiff competition from the leading subscription video-on-demand (SVOD) streaming services but that it would be increasingly competing for eyeballs from Facebook, Instagram and Snapchat, which have all been investing heavily in video over the past few years.

“UK adults have been migrating their social media and video habits over to mobile for some time,” eMarketer senior analyst Bill Fisher said. “It’s no surprise, then, that the social media platforms have been making major plays in the video space. YouTube viewership isn’t going to drop away, of course — it’s too well-established. But it’s going to have to compete for video-viewing time from a multitude of other options like never before.”
Tweet