Rapid TV News - Discovery to measure total video across all European screens for Winter Olympics
By continuing to use this site you consent to the use of cookies on your device as described in our privacy policy unless you have disabled them. You can change your cookie settings at any time but parts of our site will not function correctly without them. [Close]

Aiming to get a real handle on reach for the new world of TV, Discovery Communications has announced that it has developed a first-of-its-kind methodology to measure audience behaviour across Europe for the forthcoming Olympic Winter Games. 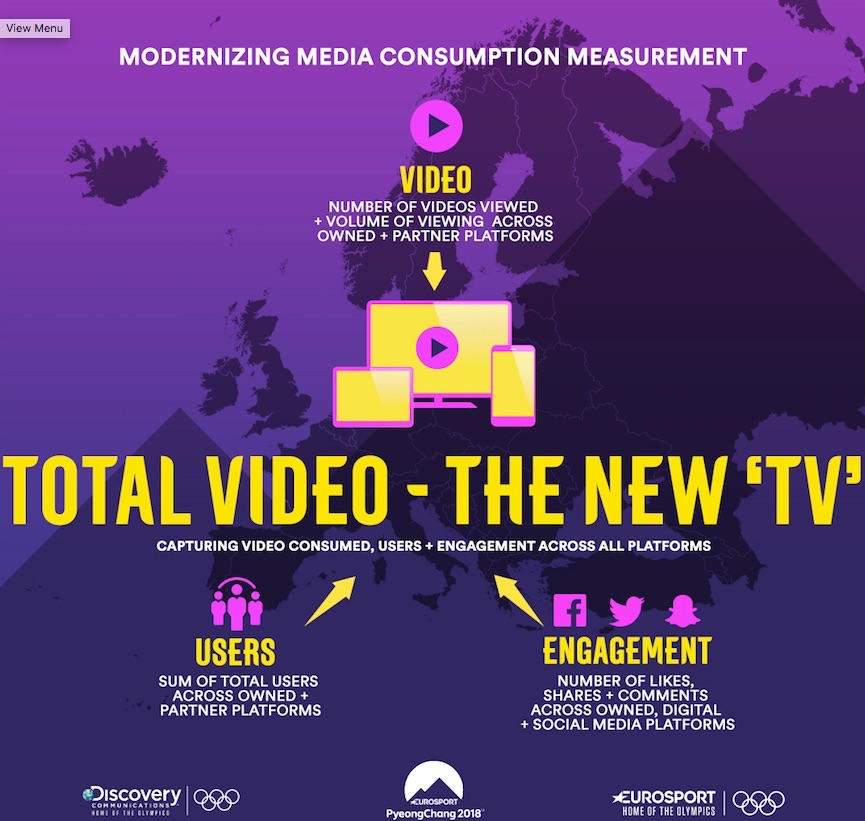 The company, through its leading sports brand Eurosport, has made huge investment into coverage for the Winter Olympics for which it says it will deliver the first fully digital Games for Europe, with live and on-demand coverage in 48 markets. The interactive Eurosport Player will offer over 4,000 hours of coverage and 100 events, including 900 hours of live action, online, on mobile, tablet devices and connected TVs. It has also just launched a dedicated Winter Olympics Eurosport virtual reality (VR) app which it says will be the only destination in Europe for fans to fully immerse themselves in the games using VR, with more than 50 hours of live coverage available.

To match its coverage ambitions and provide a more complete picture of the popularity and importance of the Olympic Games, which has been endorsed by the International Olympic Committee, Discovery believes that it is offering a new methodology that captures video, users and engagement across all platforms. Furthermore, it says that will now reflect actual behaviour of audiences as they enjoy the Olympics on every screen and service.

Three new metrics, co-developed with Publicis Media, will together capture total video - known by some as 'the new TV' - across free-to-air, pay TV, online and social platforms for the company's own platforms and those of all its partners - on tablets, mobile or traditional television screens. It will measure videos viewed and the volume of viewing expressed in hours across Discovery's owned and operated platforms, including free-to-air, pay TV, streaming services, digital, apps and social media, in addition to traditional audience data from its broadcast partners throughout Europe.

It will also track the total users across Discovery's owned and operated platforms, including free-to-air, pay-TV, streaming services, digital, apps and social media, in addition to traditional audience data from its broadcast partners throughout Europe. Finally, it will address engagement such as the number of likes, shares and comments across all of Discovery's digital and social media properties, covering all platforms.

"Clearly the way people consume content and particularly big events has evolved, which is why we need to bolster traditional measurement methods and expand the metrics of television to capture Total Video - the new TV," said Discovery Networks International president and CEO Jean-Briac Perrette. "The Olympic Games is the biggest event in the world and therefore is the best testing ground for studying video consumption. We are committed to delivering the ultimate viewing experience for audiences across Europe, enabling them to enjoy every minute of the action from PyeongChang 2018, whenever and on whatever device they choose to watch it."

Added Chris Jones, global lead, research and evaluation at Publicis Media Sports & Entertainment: "[The] audience reach methodology...neatly meshes data from different sources. Importantly, official audited data from television and online measurement systems are at the heart of the calculation but clever use of survey research allows us to understand the cross-over in people who connect with the Games via both television and digital/social platforms meaning we can remove any double counting and determine the true pan-European audience reach of an event for the first time."