Netflix, Hulu, Amazon Prime Video to triple SVOD original content spending by 2022 | VOD | News | Rapid TV News
By continuing to use this site you consent to the use of cookies on your device as described in our privacy policy unless you have disabled them. You can change your cookie settings at any time but parts of our site will not function correctly without them. [Close] 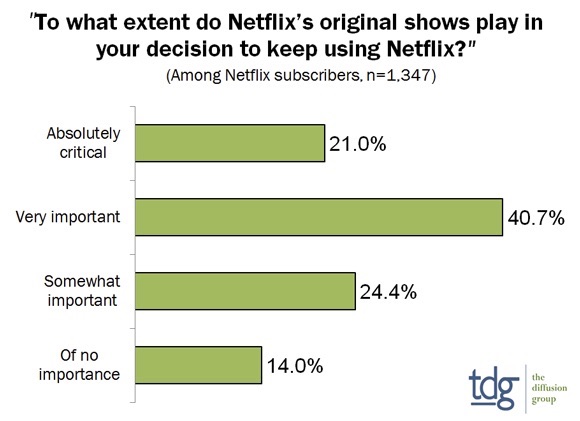 The so-called 'big-3' SVOD players are set to shift an increasing percentage of their content budgets from licensing third-party films and show to originals - an extremely important strategy play, says TDG. The research found that among Netflix subscribers, 21% rank originals as absolutely critical in their decision to keep using the service, while 41% rank them as very important. Only 14% said originals were of no importance in this decision.

"The data is unequivocal," noted Brad Schlachter, TDG senior advisor and report author, "though the relevance of original programming varies by service. The big-3 SVOD players own 60% of TV streaming time. They are looking to grow this share by creating compelling originals that serve both to attract new users and retain existing subscribers even as subscription rates increase."

TDG added that much like much like HBO decades ago, the big-3 now have a much better understanding of the limits of licensed content and the benefits of a viable slate of originals. "Of course, not all originals find an audience or generate a huge buzz," added Schlachter. "But when they do, it can change the fortunes of a company. Just look what The Handmaid's Tale did for Hulu, or what House of Cards did for Netflix." TDG also noted that as studios like Disney pull their most compelling content from big-3 SVOD libraries, the necessity of a strong schedule of originals becomes more obvious.

Yet in a sign that the big-3 may not get everything their way, TDG stressed in its Big-3 SVOD and the Original Content Arms Race - Analysis & Forecasts that they were not the only players eyeing a larger slice of the originals on-demand streaming market. It pointed to companies such as Facebook and Apple which are investing in original TV-quality programming to distribute directly to consumers. It also said that Disney's initiatives to launch its own D2C 'channels' will make it a potent competitor in this space.
Tweet