euronews to publish 360° content on smart TVs | Infrastructure | News | Rapid TV News
By continuing to use this site you consent to the use of cookies on your device as described in our privacy policy unless you have disabled them. You can change your cookie settings at any time but parts of our site will not function correctly without them. [Close]

For what the news organisation says is the first time, 360° euronews content will be available on connected TVs across the globe as part of a partnership with virtual reality (VR) and 360° TV platform provider The Dream VR. 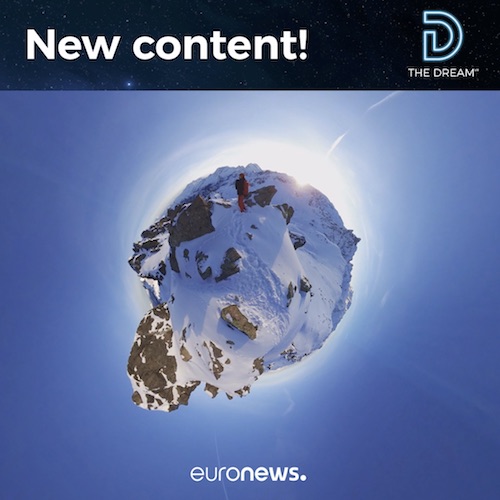 euronews claims to be the first international newsroom to fully incorporate 360º video news into its production workflow in 2016. Looking at a potential audience of 300 million Samsung smart TVs and 50 million Apple TVs in 180 countries, euronews is the first news media to partner with The Dream VR, joining over 150 channels, with content from Disney, Sony, Universal, Univision and leading global football clubs. euronews says that patented technology will allow The Dream VR users to activate the 360° content on smart TVs using just the remote control arrows.

A selection of euronews immersive content is already available via a dedicated channel on The Dream VR app and fresh content will be uploaded as it is produced. The partnership also includes monetisation of euronews' 360° videos via display advertising. The immersive journalism project was launched in July 2016 with the support of the Google Digital News Initiative fund (DNI). euronews calms to be the only current global and multilingual media outlet to fully incorporate 360° interactive video news into its production work.

"Reaching new audience is the euronews immersive journalism team's aim in 2018. We are very pleased to benefit from the innovative and exclusive worldwide solution from The Dream VR to allow smart TV viewers to live a unique experience of international and European news," said euronews VR and immersive journalism editor, Thomas Seymat.

Added The Dream VR CEO Albert Palay: "[We are] extremely glad to be able to have euronews as a partner, the latter being the biggest news player in Europe, with growing potential and influence around the world thanks to their recent partnership with NBC News. This collaboration gives us the chance to have great up-do-date content of general interest, which will attract a varied and high standard public worldwide."