UAE prepares for Al Yah 3 launch | Satellite | News | Rapid TV News
By continuing to use this site you consent to the use of cookies on your device as described in our privacy policy unless you have disabled them. You can change your cookie settings at any time but parts of our site will not function correctly without them. [Close]

UAE's latest satellite Al Yah 3, designed to boost communication services across the Middle East, Africa and Brazil, is ready for launch by Arianespace from French Guiana. 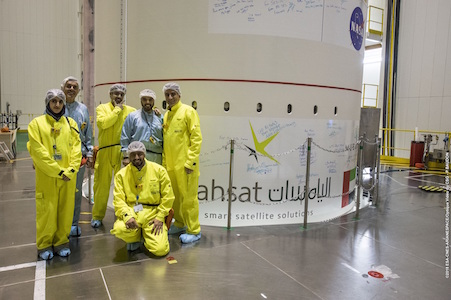 Once operational at 20 degrees west, Al Yah 3 will provide commercial Ka-band coverage to 60% of Africa's population and over 95% of Brazil's population, through direct-to-home (DTH) television, satellite services and broadband brands Yahlive, YahClick, YahService and YahLink.

Engineers from operator YahSat left personal messages on the satellite (pictured) before it was loaded onto the Ariane 5 launch vehicle.

Al Yah 1 was launched in April 2011 followed by Al Yah 2 in April 2012. The satellites' operator, Yahsat, is owned by Mubadala, the investment of arm of the Abu Dhabi Government.

Orbital-built Al Yah 3 will be launched along with SES-14, by an Ariane 5 rocket from the Guiana Space Centre in Kourou. The launch, scheduled for between 22.20 and 23.05 universal time on 25 January, will represent the first mission of 2018 for Arainespace.
Tweet