Global TV panel shipments inch upwards in 2017 | 4K/UltraHD | News | Rapid TV News
By continuing to use this site you consent to the use of cookies on your device as described in our privacy policy unless you have disabled them. You can change your cookie settings at any time but parts of our site will not function correctly without them. [Close]

Even though TV panel makers increased the production shares of large-size panels and Ultra HD panels during 2017, panel shipments grew by just 1.3%, according to research firm WitsView. 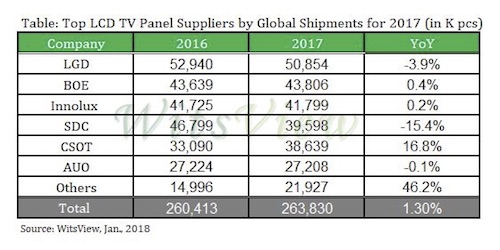 The analyst calculated that global LCD TV panel shipments increased quarter-by-quarter in 2017, with the first half showing less momentum for holiday sales due to the high prices, but with shipments rebounding in the second half as prices declined and TV makers prepared for the year-end sales.

The data showed LG Display (LGD) remained the leader in the TV panel market while BOE took second place for the first time. In the global TV panel shipment ranking for 2017, LGD came first place with a shipment of around 50.85 million pieces last year, a decrease of 3.9%. LGD expanded its production capacity in Guangzhou fab for 50K sheet, but in terms of panel size, increasing the production capacity share of 65" and greater panels has been the trend.

Particularly, LGD shipments of 65" and 75" panels have increased significantly, by 38.5% and 132.7% respectively, indicating that LGD has been making efforts to retain its market share in large-size TV panel sector before BOE’s Gen 10.5 fab enters mass production.

BOE’s Gen 8.5 fab in Fuqing and HKC’s Gen 8.6 fab in Chongqing has been focusing on middle-size TV panels (43" and 32" respectively), bringing the annual shipments beyond expectation to 263.83 million pieces, an increase of 1.3% compared with 2016.

Looking at prospects for 2018, Iris Hu, research manager of WitsView, noted that panel makers will continue to increase the production shares of large-size panels and Ultra HD panels to boost the revenue and profit. “The penetration rate of Ultra HD panels is expected to reach 42% this year, an increase of 7.4 percentage points compared with 2017,” she said.

“Regarding the new production capacity, BOE’s Gen 10.5 fab produces mainly large-size TV panels (65" and 75"), but CEC’s two fabs still put their priorities at middle-size ones (32" and 50"). Meanwhile, replacement of CRT TV sets with 32" and 23.6" LCD ones is still ongoing in emerging markets, making the average panel size grow slower to 45.8", only 1.3" up from 2017. Overall speaking, global TV panel shipments this year will have chance to hit a second highest number in history, reaching 269.49 million pieces, an annual increase of 2.2%.”
Tweet