Millennials drive OTT in Mexico | Media Analysis | Business | News | Rapid TV News
By continuing to use this site you consent to the use of cookies on your device as described in our privacy policy unless you have disabled them. You can change your cookie settings at any time but parts of our site will not function correctly without them. [Close]

One in four Mexicans under 35 are currently subscribing to at least one over-the-top (OTT) video service, the Instituto Federal de Telecomunicaciones (IFT) has revealed. 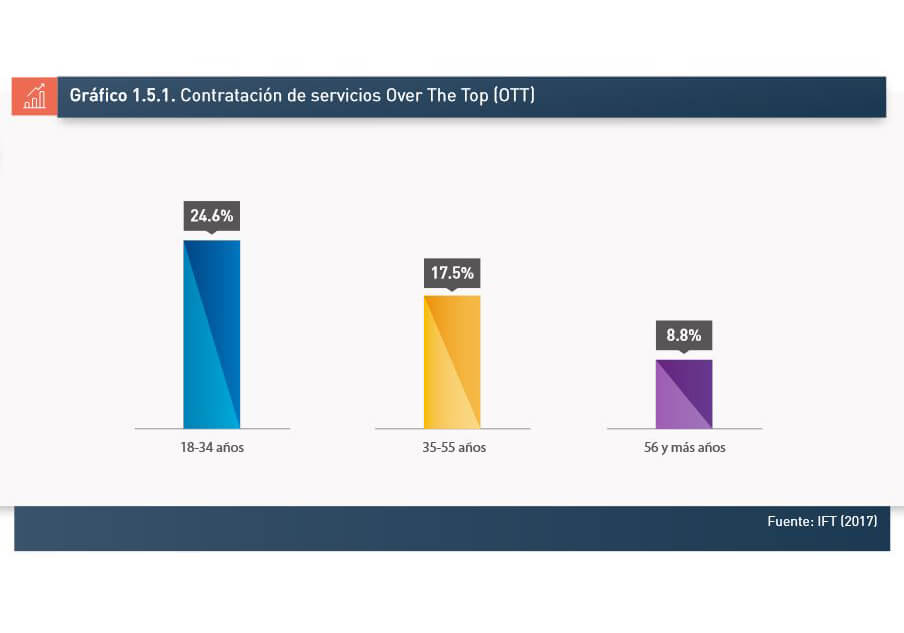 According to figures from the Tercera Encuesta 2017 – Usuarios de Servicios de Telecomunicaciones, OTT consumption is becoming mainstream for the younger demographics in Mexico.

Age groups don’t affect the market leader, as Netflix is the most subscribed to video-on-demand (VOD) platform across every demographic and is the favourite platform for over seven in ten Millennials.

Coming in second is Claro video, owned by América Móvil, which has seduced 25% of Millennials and over a third of OTT users over 35, with Televisa’s blim third with a penetration rate nearing 10% among those aged 18-55.

There aren’t many surprises regarding the content selected by OTT users, with films and series leading consumption habits, although series are less popular among older age groups. Sports, children’s programming, soap operas and documentaries are also popular among Mexican OTT viewers.

For now, the growing OTT sector doesn’t seem to be eroding Mexico’s healthy pay-TV market. According to the latest figures, there are over 22 million pay-TV households in the country (67% penetration), a figure which has seen continuous growth over the past year.