French say non to Netflix | VOD | News | Rapid TV News
By continuing to use this site you consent to the use of cookies on your device as described in our privacy policy unless you have disabled them. You can change your cookie settings at any time but parts of our site will not function correctly without them. [Close] 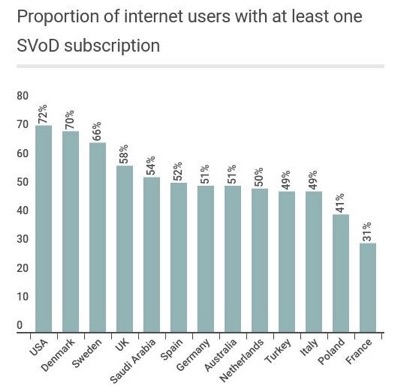 Ampere’s ongoing research found that in Europe and the US, homes are increasingly likely to supplement their viewing by combining SVOD with a pay-TV service from a cable, satellite or IPTV provider, or to take SVOD without a pay-TV service at all. Yet despite having one of the highest uptakes of paid television the Ampere data found that French homes were the least likely among 14 countries surveyed to take SVOD overall, and the least likely to take SVOD with a companion pay offer.

The French also showed a preference for traditional pay-TV services and were not paying to add SVOD services like Netflix and Amazon Prime Video. Of the homes taking pay-TV or SVOD, only 32% in France take both, the lowest rate among countries surveyed.

French Internet users were found to more than twice as likely to prefer pay-TV over SVOD. Overall, 31% have an SVOD service compared to 76% who take a traditional pay TV offer. By comparison, in the US 72% have SVOD and 71% have pay-TV, and in the UK 67% have pay-TV and 58% subscribe to SVOD. Only 3.1% of French households are SVOD only, compared with 14.3% in the US and 14.4% in the UK. Where SVOD is taken, it is more likely to be as part of a content stack.

Yet this situation may change over time. Ampere found that enthusiasm for SVOD is France was clearly driven by younger consumers who make up almost two-thirds of France’s SVOD subscriber. At 61%, 18 to 24-year-olds were much more likely to have. This compares favourably to countries like Spain, where 67% of 18 to 24-year-olds have SVOD compared to 51% among the general population. Yet it does remain lower than other major markets like the UK (81% vs. 58%), Germany (78% vs. 51%) and the US (86% vs. 72%).

With a 21% market share, Netflix was France’s most popular SVOD system, totally outgunning Amazon Prime Video on 7% and CanalPlayInfinity on 5% and SFR Play which both had a 5% share. A third (32.6%) of Netflix’s audience in France is aged 18 to 24, with 28% of the audience falling in the 25-34 age bracket.
Tweet